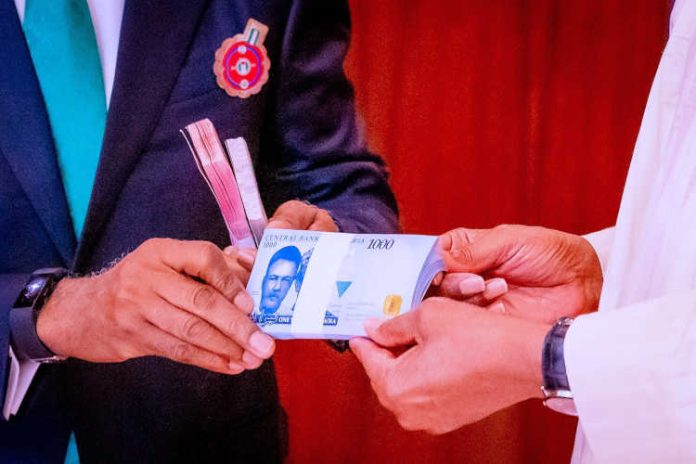 Mixed reactions have continued to trail the unveiling of the new naira notes.

The apex bank had earlier announced plans to redesign, produce, release and circulate a new series of three banknotes (N200, N500 and N1,000) out of the existing eight banknotes.

Reactions to the new notes

Former federal lawmaker from Kaduna State, Shehu Sani, said, ‘What shall it profit a naira if it can get a whole new colour and still lose its value?’

What shall it profit a Naira if it can get a whole new colour and still lose its value.

On a lighter note, there have also been hilarious reactions on Twitter to the new designs, with many joking that Snapchat was used for the redesign.

Another tweet from Sani read, ‘If it’s naira colour, the CBN should have just engaged snapchat’.

If it’s Naira colour,the CBN should have just engage Snapchat.

Another tweep, Cindy Okere, said, ‘Nigerians are waiting to hear how much CBN spent on filter, for the bleaching of our naira’.

Nigerians are waiting to hear how much CBN spent on FILTER,for the bleaching of our Naira 🤷🏼#CBNGovernor #filtered #NairaRedesign

For his part, the presidential candidate of the African Action Congress (AAC), Omoyele Sowore, faulted the redesign of the naira, saying the federal government should have given the funds used in producing the notes to the Academic Staff Union of Universities (ASUU).

In his reaction to the redesigned banknotes, the Executive Director of the Nigeria Network of NGOs (NNNGO), Oluseyi Oyebisi, condemned criticisms of them.

Commenting via his Facebook page, Oyebisi tried to educate some Nigerians on why the redesign was done in the first place.

He said, ‘Before you join the bandwagon and regurgitate that only colours were changed in the redesign, note that colour changes are also part of a redesign, watermarks, that are visible when held up to a light, embedded security threads that glow a colour when exposed to ultraviolet light.

‘The note as you see will also spot some colour-shift ink when looked straight at different angles. Now to get the colour right several machines will have to be used. This helps to prevent counterfeiting’.

As for the Executive Director of the Civil Society Legislative Advocacy Centre (CISLAC), Auwal Ibrahim, he had in October condemned the decision to redesign the naira notes, saying it was not an economic priority and will not solve the nation’s monetary policy challenges.

Reasons for the redesign

President Buhari had said that the new naira banknotes have been fortified with security features that make them difficult to counterfeit.

He also said that the redesigned notes would help the CBN design and implement better monetary policy objectives as well as enrich the collective memory of Nigeria’s heritage.

The currency redesign also aims to reduce the issue of kidnapping and ransom collection and control the money in circulation.

Nigerians however look forward to how the new naira notes would achieve one major objective, which is to lower the rate of inflation, if one is to go by what the CBN governor said.

Therefore, citizens should not be carried away with the criticisms and jokes about the new naira notes, but pay attention to the reasons the CBN has given and hold the apex bank accountable when these reasons do not solve the underlying issues.