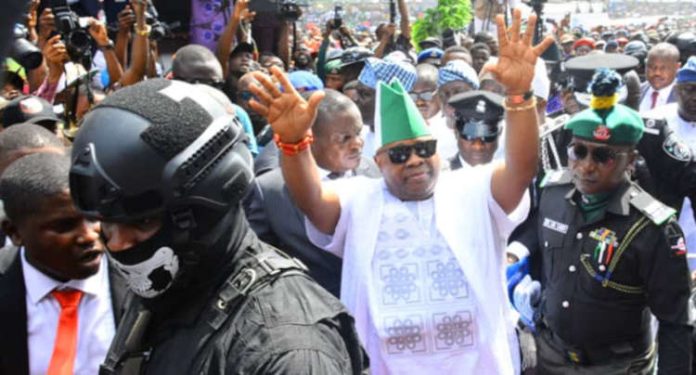 Development Diaries reports that Adeleke and his deputy, Kola Adewusi, took their oaths of office, which were administered by the Osun State Chief Judge, Adepele Ojo, on Sunday, 27 November.

In his inaugural speech, Adeleke reiterated his promise to correct all past injustice, corrupt acts or policies by any previous administration which are against the collective interest of the people.

Specifically, the governor promised to address issues in the education, health, and agricultural sectors.

‘Our administration will demonstrate a high sense of urgency, transparency, justice and innovation to tackle and solve the problems of poverty, illiteracy, disease, and poor infrastructure.

‘I am well aware of the fact that my responsibility as the Governor and Chief Security Officer of Osun State entails meeting the legitimate expectations of our people.

‘Therefore, I promise that those expectations of the workers, traders, artisans, farmers, business owners, students, pensioners, traditional and religious leaders and indeed all residents of Osun State will be met by the grace of God and the cooperation of everyone.

‘As I accept the mantle of leadership entrusted upon me by the people of our dear state, I am conscious of the enormous challenges and responsibilities ahead of me and will begin from this hour with deep sense of purpose to be a servant to you all’.

Governor Adeleke had unveiled a five-point agenda that would drive his policy as governor to meet his people’s yearnings.

The first on the list was to clear the state’s backlog of salaries and pensions.

Now that Adeleke has taken the oath of office, it is expected that he does not just thrill the people of Osun State with his frenetic dance moves, but begin work to meet the expectations of the people as promised.

The people of Osun State should not relent in holding their governor accountable over the fulfilment of his electoral promises.

Section 16 (ten) of the 1999 Constitution (as amended) gives Nigerians a right to prosperity, equal distribution of wealth, equality of status, happiness, non-monopolisation of the economy, provision of adequate shelter, suitable and reasonable minimum wage, old-age care, pension and employee benefits.

The people of Osun should also demand access to quality education for their children, and the security of their state, because these are the rights and obligations of the citizens as enshrined in the constitution.

Finally, the citizens of Osun must ensure they track, monitor and report the delivery of the governor’s campaign promises.