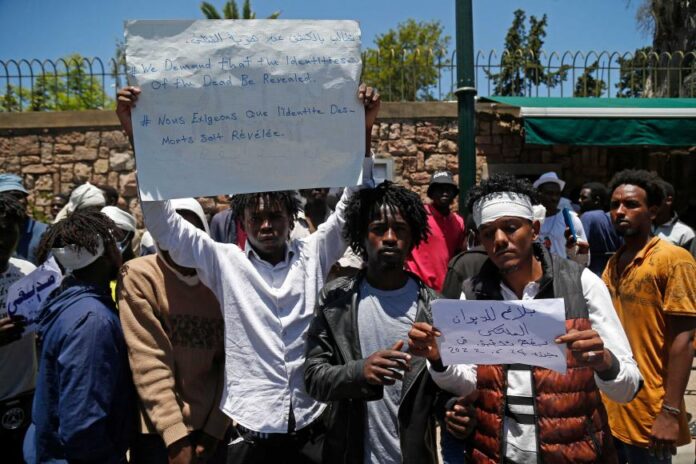 Human Rights Watch (HRW) has called for an independent, impartial investigation into the death of more than 23 African migrants attempting to cross the fence between Morocco and Spain.

HRW, in a statement, said investigation was needed to determien what occurred and who bears responsibility for such loss of life.

It also called on the authorities in Morocco to preserve their bodies in a dignified and appropriate manner to allow for autopsies and verification of cause of death.

Development Diaries had reported that Moroccan security forces allegedly used excessive force, including beatings, on the migrants who attempted to scale the border fence.

HRW said it has verified photographs of at least ten freshly dug individual graves in Sidi Salem Cemetery on the outskirts of Nador, the Moroccan town across the border from Melilla.

‘The preservation of evidence is crucial to ensure a full investigation. To this end, it is vitally important for the Moroccan authorities to make every effort to preserve the bodies in a dignified and appropriate manner to allow for autopsies and verification of cause of death’, HRW said in the statement.

‘The authorities should do all they can to identify the dead and inform their families, following the collection of forensic evidence of injuries and cause of death that may be relevant to the investigation, it is incumbent on Morocco to organize transfer of the deceased to their families for burials in accordance with their wishes.

‘Large-scale attempts to climb over the fences around Melilla pose security concerns but in no way justify the violence we have seen. The men who died, and the survivors, deserve a credible investigation and to see those responsible held to account’.

The United Nations Basic Principles on the Use of Force and Firearms by Law Enforcement Officials require law enforcement officials, including border guards, to apply nonviolent means before resorting to force.

The principles also provide that governments shall ensure that arbitrary or abusive use of force and firearms by law enforcement officials is punished as a criminal offense under their law.

Freedom House rated Morocco as ‘partly free’ in its 2022 Freedom in the World study of political rights and civil liberties, with the country earning 37 points out of a possible 100.