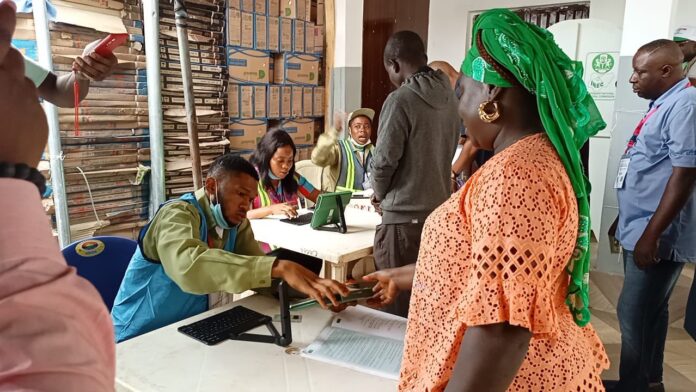 Welcome to Development Diaries election monitoring room and live reports. We brought to you live reports from Ekiti State, as the people of the Fountain of Knowledge today, 18 June, 2022, elected their next governor.

According to Nigeria’s electoral umpire, Independent National Electoral Commission (INEC), a total of 16 political parties presented candidates for Saturday’s election. Two of the candidates were women: Modupe Olatawura of the Action Peoples Party (APP) and Kemi Elebute-Halle of the Action Democratic Party (ADP).

This thread was open to everybody in Ekiti who participated in the election. Voters, observers, officials were encouraged to use the comment form below to report activities at the various polling units and collation centres.

4:00am: However, there were reports of massive vote-buying, with the Economic and Financial Crimes Commission (EFCC) embarking on a raid and making some arrests.

3:48am: The APC candidate polled a total of 187,057 votes to defeat his two closest challengers – Segun Oni of the Social Democratic Party (SDP) and Bisi Kolawole of the People’s Democratic Party.

9:30pm: As results for the Ekiti governorship election trickle in, Yiaga Africa says its WatchingTheVote team is receiving and verifying data directly from polling units. This, according to the nonprofit, will enable Yiaga Africa to verify the accuracy of election results released by INEC.

9:00pm: INEC begins collation of results across the 16 LGAs.

4:00pm: The sorting of ballot papers has commenced at polling unit eight, ward B, Ijero LGA.

2:48pm: Situation Room reports that accreditation and voting stopped at polling unit one, ward 11, Ikole LGA, as at 2:07pm due to crowd disturbance.

TIME: 2:07pm
LGA: Ikole
Ward: 11
Unit: 001 – BAPTIST PRIMARY SCHOOL – IJOWA
Report: At the moment, accreditation and voting has stopped as a result of crowd disturbance. So many voters yet to cast their votes and the Presiding Officer couldn’t control them.#EkitiSR2022 pic.twitter.com/b0Yk0rt7gW

2:45pm: We are informed that some registered voters without PVC voted at polling unit 21, ward two, Ekiti West LGA. Report from the polling unit says security operatives tried to arrest vote buyers but they escaped with their money.

2:30pm: Poll has closed at polling unit nine, ward nine, Efon LGA. According to observers, there were 307 registered voters and 138 voted.

2:15pm: Vote-buying, according to CDD West Africa, is ongoing at polling unit six, ward eight, Ekiti West LGA. The election observer group also reported that there were 480 people on the voters list, with the two female INEC officials at the polling unit already overwhelmed.

1:30pm: We can confirm that voting commenced at 10:30am at polling unit one, ward 13, Ado-Ekiti, due to late arrival of polling officials.

11:30am: CDD West Africa has reported the malfunctioning of BVAS at a polling unit in an undisclosed LGA.

11:15am: Aged men and women are giving priority at Fakeye hall polling unit in Irepodun /Ifelodun LGA, according to Yiaga Africa.

Aged men and women giving priority at Fakeye hall Polling Unit, Irepodun /Ifelodun LGA as citizens come out to elect the next Governor of the state. #WatchingTheVote#EkitiDecides2022 pic.twitter.com/rtwBROoNVh

11:10am: We can also report that voting is peaceful at ward two, polling unit nine, in Ilejemeje local government area. The BVAS is working, and the elderly and PWDs are given priority voting.

11:00am: Voting ongoing and smooth at ward eight, polling unit two, 12, and 27 in Ekiti South West local government are. The BVAS, it was also gathered, is working perfectly, and priority voting is observed.

10:00am: The elderly were given preference to vote at Iyin ward, polling unit 012 (Arowa compound), Irepodun/Ifelodun local government area.

9:20am: Yiaga Africa reports that women, youth and people with disabilities are coming out to vote for their preferred candidates.

Women, Youth and People With Disabilities are coming out to vote for their preffered choices.#WatchingTheVote pic.twitter.com/99N7Tpgwta

9:00am: Accreditation, according to Situation Room, started at 8:00am at ward nine, polling unit three, Gbonyin local government area.

9:00am: Situation Room reports that accreditation started on time and voting commenced immediately.

8:30am: Nigeria Civil Society Situation Room members on ground to monitor the election.

8:15am: A presiding officer addresses voters at polling unit five, ward one, Ise/Orun area of the state.

7:32am: INEC officials at polling unit six, Ido One, ready for voters.

Ekiti Governorship Election:
Polling Unit 006, Ido 1, ready for voters as at 7.32am this morning.#EkitiDecides2022 pic.twitter.com/EllvV4calT