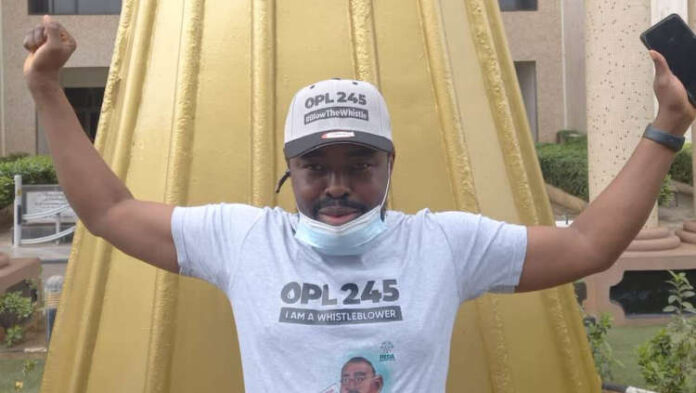 Executive Director of Human and Environmental Development Agenda (HEDA), Olanrewaju Suraju, has expressed his determination to claim damages for malicious prosecution against him.

The Federal High Court in Abuja, Nigeria’s capital, recently struck out the cyberstalking case filed against the HEDA boss by the Nigerian government for lack of evidence.

The presiding judge, Justice Binta Nyako, discharged the defendant after the Attorney-General of the Federation (AGF) and Minister of Justice, Abubakar Malami, applied to withdraw the case.

Suraju was accused of cyberstalking a former Attorney-General of the Federation (AGF), Mohammed Adoke.

The government had in a suit marked FHC/ABJ/CR/370/21 alleged that the HEDA boss circulated a fake audio of a phone interview with the aim of implicating Adoke in the Oil Processing Licence (OPL) 245 saga.

However, at the resumed hearing of the matter on 10 May, 2022, a senior prosecutor from the Federal Ministry of Justice, Yewande Cole, told the court that she was directed by the AGF to withdraw the case.

‘I have the instruction of the Attorney-General to withdraw the amended charge of two counts for further review’, she said.

‘This means that the court will strike out the case and when we are ready to go on, we will come back and refile it’.

In her ruling, Justice Nyako discharged the defendant and also directed the prosecution to release the seven million naira bail bond.

In addition, the judge ordered the prosecution to pay N250,000 to the defendant, whenever the case was going to be refiled.

In his immediate reaction to the ruling, Suraju said it was time to claim damages.

‘The final triumph of truth and consistency over falsehood, fraud, mega corruption persecution’, he said in a Facebook post after the ruling.

‘It is time to claim damages for malicious prosecution and even pursue some of our traducers for providing false information to public officers. Let the battle begin’.

Suraju has been a leading voice in the quest to ensure accountability and justice for Nigeria with regard to the sale of the controversial OPL 124 oil block, also known as Malabu bribery scandal.

Adoke, standing trial over the bribery scandal in Nigeria and Italy, had sent a petition to the Inspector General of Police (IGP) demanding a probe of an email ‘evidence’ presented against him by prosecutors in Milan.

The police, after investigating Adoke’s petition against Suraju, subsequently sent the case file to the AGF’s office which filed a cyberstalking case against the human rights activist.

Addressing journalists after the ruling, Suraju said that the case filed against him went contrary to the case the Nigerian government was pursuing against JP Morgan Chase to retrieve part of the proceeds of the alleged fraudulent scheme in the United Kingdom.

‘The Nigerian government has sued JP Morgan Chase Bank over the payment of $801million to Malabu from the account that belongs to Nigeria and because of that JP Morgan was actually the one that brought the email upon which Adoke claimed was forged’, he said.