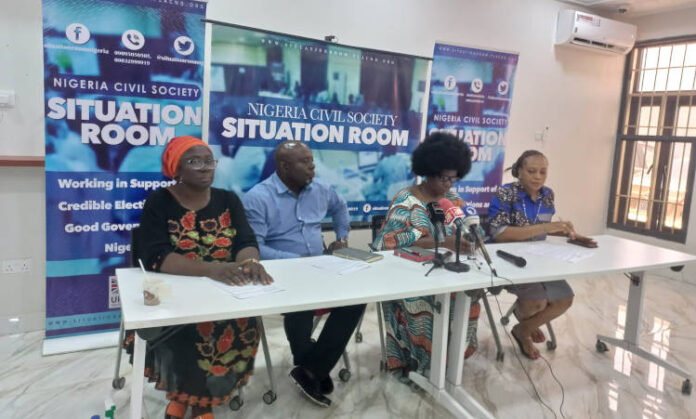 The Nigeria Civil Society Situation Room has urged the federal government of Nigeria to create a democratic environment to ensure a free, fair, credible and inclusive 2023 general election.

The group of civil society organisations (CSOs) made the call while raising concerns over the high cost of expression of interest and nomination forms for next year’s polls.

Speaking at a press conference in Abuja, the nation’s capital, the Situation Room Convener, Ene Obi, said the high cost of forms puts marginalised groups at a great disadvantage.

At the governorship level, aspirants on the platform of the APC paid N50 million for forms, while their PDP counterparts paid N21 million.

A comparison of the difference in prices between the 2015 and 2023 election cycle shows about 81 percent increase in the price of these forms.

According to the Situation Room, these prices ironically take the capacity to contest elections out of the reach of marginalised groups.

‘Although both parties have given some form of waivers to women, persons with disabilities (PWDs) and youth, Situation Room notes that the costs of these forms are still exorbitant considering the economic realities in Nigeria and the financial state of most Nigerians’, she said.

Obi added, ‘Indeed, this further widens the inequality gap which is quite discriminatory as we have seen people from humble backgrounds attain leadership positions in Nigeria’.

She also raised concerns over the presidential ambition of the Governor of Central Bank of Nigeria (CBN), Godwin Emefiele.

Emefiele has been under pressure since a group of millionaire farmers allegedly bought for him an APC Expression of Interest and Nomination Form for the Office of President.

He has also been confirmed to be a registered member of the ruling APC as far back as February 2021.

‘Of utmost concern is the role the CBN plays in safeguarding and delivering election materials as part of INECs efforts to guarantee the safety of materials’, she said.

‘The whole aim of relying on the neutrality of the CBN to carry out this task has been defeated if the person at the helm is a member of a political party.

‘It is equally in bad taste that he approached the court to declare him eligible to run for president’.

Under Emefiele’s watch, the apex bank has funded the federal government’s deficits above the legally permissible limit, and the bank has not published its annual reports since 2018.