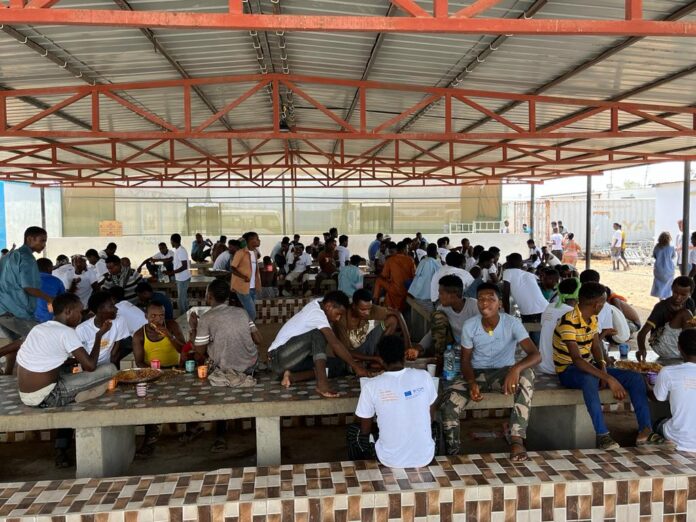 The International Organisation for Migration (IOM) has provided 280 migrants residing at the Migration Response Centre (MRC) in Obock, Djibouti, with food as part of the Eid al-Fitr celebrations.

Obock is the departure point for predominantly Ethiopian migrants seeking to cross through Yemen to Saudi Arabia and other Gulf states, where they hope to find a job.

‘280 migrants residing at the Migration Response Centre (MRC) in Obock celebrated [Eid al-Fitr], which symbolises the completion of the month of privation, prayers and sharing of Ramadan, over a delicious meal followed by a coffee ceremony’, IOM Djibouti said in a tweet.

According to the United Nations High Commission for Refugees (UNHCR), Djibouti hosts approximately 35,000 persons of concern, including over 23,000 refugees and 11,000 asylum-seekers, residing in Ali Addeh, Holl Holl, Djibouti city and Markazi refugee villages.

Conflict, drought and violence in the Horn of Africa have forced many to seek protection in Djibouti. Its position has also made it a transit country and the main route for migration towards Yemen and beyond.

Every year, tens of thousands of mainly young East African migrants make the dangerous journey from countries such as Somalia and Ethiopia to Djibouti in a bid to get to the Middle East.

A report by Expertise France shows that Djibouti finds itself caught in the middle of several factors that are driving bi-directional irregular migration from the Horn of Africa to Yemen, and vice versa.

Djibouti aims to improve the welfare of migrants and that of host communities through the country’s first national strategy for Migration, launched with the support of the IOM in 2021.

The strategy is expected to offer assistance and promote sustainable livelihoods for migrants impacted by conflict, protracted crisis, climate change and the lack of jobs.

According to UNHCR, the government of Djibouti has been providing refugee protection through legislative reforms and has embraced the Comprehensive Refugee Response Framework (CRRF).