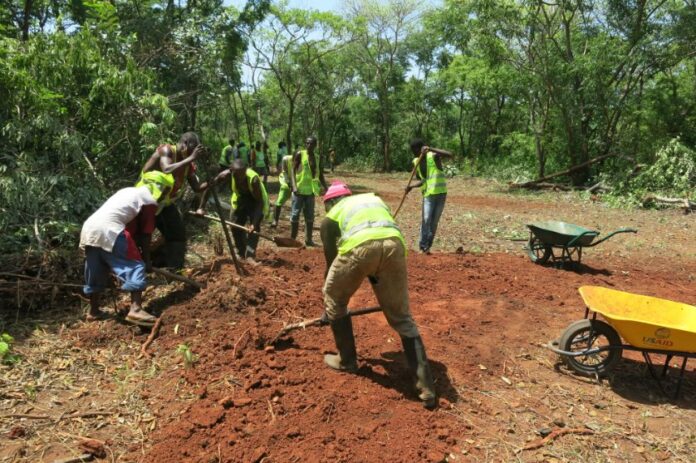 Oxfam International has commenced the reconstruction of a three kilometres road to link two villages together in the Central African Republic (CAR).

The new track, according to the organisation, will connect the village of Horolo to Mangouloumba, with 100 youths mobilised to carry out the project.

It is understood that the intervention comes under the organisation’s FSL programme, funded by the Bureau for Humanitarian Assistance (BHA) of the United States Agency for International Development (USAID).

‘[Oxfam CAR], through its FSL programme and thanks to funding from the Bureau for Humanitarian Assistance (BHA) of USAID, is rehabilitating a [three] KM track linking the village of Horolo to Mangouloumba (on the Wada). 100 young people were mobilised for this CFW activity’, Oxfam said in a Twitter post.

A landlocked country in the middle of Africa, CAR is one of the poorest countries in the world, ranking 188 out of 189 on the Human Development Index in 2018.

The roads network in the country covers a total distance of about 24,000 kilometres, with only 700 kilometres asphalted.

The World Bank, in a 2019 report, noted that the road network in CAR was not only insufficient, but poorly maintained as sections were impassable in the rainy season, cutting off connectivity for entire communities.

Additional data from the Borgen Project reveals that infrastructure including roads in the CAR is in a very poor state.

The Borgen Project also noted that the central African region has the worst infrastructure in Africa.