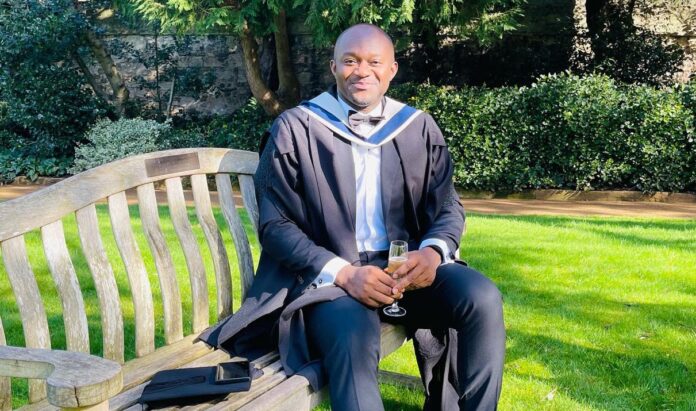 The Executive Director of Yiaga Africa, Samson Itodo, has earned a nickname amongst his colleagues in the development sector.

‘Big Sam’, as he is now called, recently earned a master’s degree in Public Policy from the University of Oxford, United Kingdom.

Development Diaries had reported in 2020 Samson’s scholarship from Africa Oxford Initiative (AfOx) to study for a master’s degree in the aforementioned discipline.

Samson, the convener of the #NotTooYoungToRun movement in Nigeria, was part of six scholars selected by AfOx for the scholarship for demonstrating strong convictions in global citizenship, leadership capacity, and commitment to Africa’s development.

Former Executive Secretary of the Nigeria Extractive Industries Transparency Initiative (NEITI), Waziri Adio, who coined the new nickname for Samson, said he was proud of his achievements.

‘Big Sam, Samson Itodo, warm congrats on graduating with a master’s in Public Policy from the University of Oxford. While proud of your strides so far, I know it is morning yet for you. Keep going’, Waziri tweeted.

In his response, Samson said, ‘Thanks, boss, for the mentorship and guidance. Many thanks for helping me stay grounded. I appreciate’.

It was at this point that the Executive Director of BudgIT, ‘Seun Onígbíńdé, took cognisance of Samson’s new name.

‘You have a new name – Big Sam. Congratulations bro’, the BudgIT executive tweeted.

Samson’s latest educational achievement is expected to help him scale his work in Nigeria’s civic space.