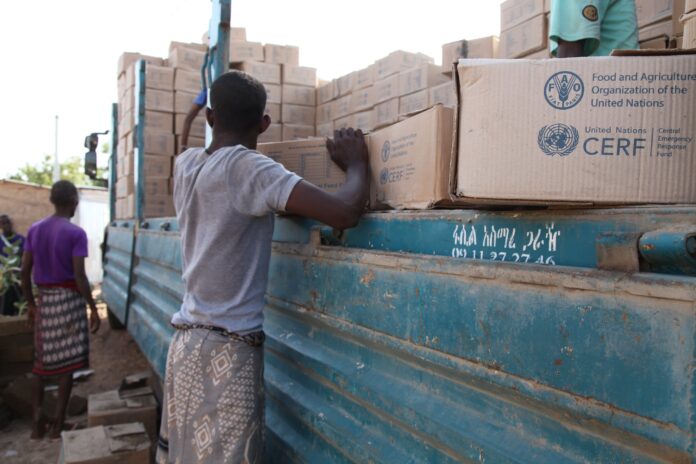 The Food and Agriculture Organisation (FAO) has received funding from the United Nations Central Emergency Response Fund (UNCERF) and the German government to mitigate the impact of the drought in Ethiopia.

It is understood that the funding has enabled the FAO to provide water, cash, livestock feed and health services to affected communities in the Horn of Africa country.

‘Drought in southern [and] southeastern parts of Ethiopia is eroding livelihoods of pastoral [and] agropastoral communities’, FAO tweeted.

‘With funding from [UNCERF] [and] [government] of [Germany], [FAO] is providing livestock feed, cash, livestock health services [and] water to affected communities’.

Development Diaries gathered that the drought is most severe in the southern and southeastern regions of Somali, Southwest and Southern Nations, Nationalities and Peoples (SNNP).

Data from the United Nations Children’s Emergency Fund (UNICEF) shows that in drought-affected areas in Oromia and Somali, around 225,000 malnourished children and over 100,000 pregnant and breastfeeding women need urgent nutrition support.

The United Nations Office for the Coordination of Humanitarian Affairs (UNOCHA) noted in January 2022 that the drought was affecting the livelihood of some 6.8 million people and disproportionally affecting women and children.

The effect of the drought is further compounded by fighting between Ethiopian troops and the Tigray People’s Liberation Front (TPLF). The fighting started after the TPLF attacked a key Ethiopian military base in the region in November 2020.

The Tigray Emergency Food Security Assessment, a new study by the World Food Programme (WFP), found that 83 percent of people in the region are food insecure as a result of the conflict.