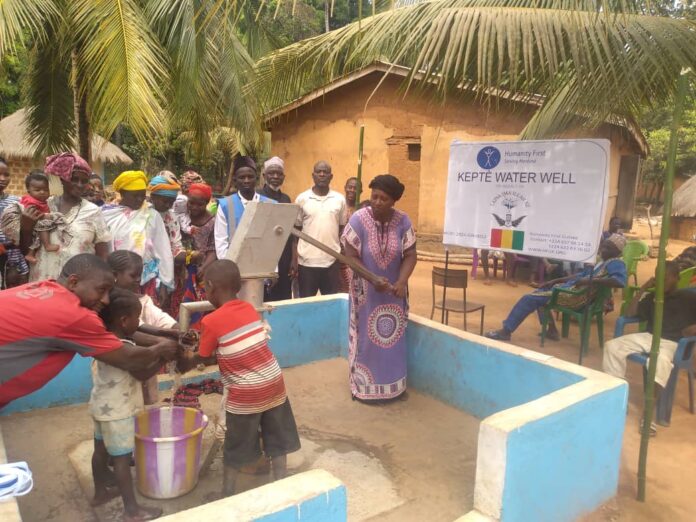 Development Diaries gathered that the nonprofit installed the handpumps in the village with financial support from New Zealand-based Ahmadiyya Muslim Women’s Association.

According to the United Nations (UN), water scarcity affects more than 40 percent of people, an alarming figure that is projected to rise as temperatures do.

Clean water and sanitation, which is crucial to human health and well-being, is number six of the 17 Sustainable Development Goals (SDGs).

‘Ensure availability and sustainable management of water and sanitation for all’, the SDG six reads.

Only about half of all Guineans have access to improved water sources, and just 18 percent have access to proper sanitation facilities, data from the United Nations Children’s Emergency Fund (UNICEF) shows.

Additional data from UNICEF also suggests that surface water in Guinea is unsafe for drinking and every one in three Guineans drinks unsafe water.

‘The people of [Kepte] village in Boke region have access to clear water thanks to the generous donation from our donors in New Zeeland’, Humanity First said in a tweet.

The country’s government, it is understood, is implementing a National Strategy for the Development of the Public Water Service in Rural and Semi-Rural Areas (PNAEPA) to strengthen the sector.

The PNAEPA is in convergence with the Economic Community of West African States (ECOWAS) water policy and vision.

However, data from the World Health Organisation (WHO) shows that only 55 percent of the rural population are using basic drinking-water sources.