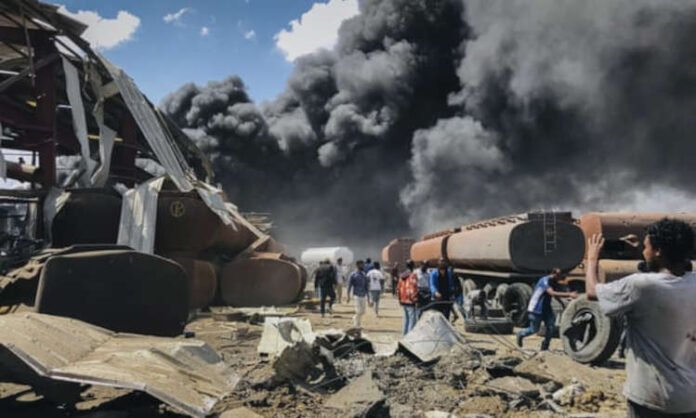 Humanitarian organisations have halted their operations in Ethiopia’s Tigray region following an air strike that reportedly killed civilians in a camp for displaced people.

The air strike killed 56 people and injured 30, including children, according to local authorities and eyewitness accounts.

Development Diaries gathered that the attack, which happened on 07 January, targeted a camp for displaced people in the town of Dedebit in northwestern Tigray.

‘Humanitarian partners suspended activities in the area due to the ongoing threats of drone strikes’, the UN Office for the Coordination of Humanitarian Affairs (OCHA) said in a statement.

OCHA said a lack of medicines, fuel, and other essential commodities was ‘severely disrupting the response to the injured, and [has] led to the nearly total collapse of the health system in Tigray’.

More than 2.1 million people have been displaced due to fighting between Ethiopian troops and the TPLF, the regional government in Tigray.

The fighting started after the TPLF attacked a key Ethiopian military base in the region in November 2020.

‘The intensification of air strikes is alarming, and we once again remind all parties to the conflict to respect their obligations under international humanitarian law’, OCHA said.

Reports of the air strike could not be identified independently as access to Tigray is restricted, and the region remains under a communications blackout.

It is understood that the ongoing conflict and a huge funding gap are making humanitarian food assistance to millions of Ethiopians across the country uncertain.