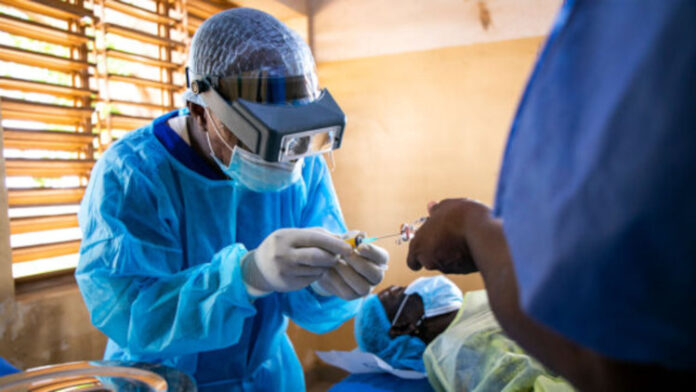 When Colonisers partitioned my continent in the infamous ‘Scramble for Africa’, they split apart communities that had existed for centuries. Family connections were severed, and people at the borders became subject to the bureaucracy that comes with international boundaries. This legacy hinders progress to eliminate trachoma, a devastating disease which turns eyelashes inwards so that they painfully scrape the eye blind, and other neglected tropical diseases (NTDs) today.

If you look at a map of trachoma for Kenya, Tanzania and Uganda, you notice that the bright red or orange colours, showing areas with high case numbers, are clustered along the borders. Inland the map is green, blue or yellow, showing that all three countries are making great strides towards eliminating the disease as a public health problem. These three countries have been treating people for trachoma, going door-to-door administering drugs in even the most remote areas, since 2007. Trachoma should no longer be a public health problem here. But surveys shows that the disease continues – particularly on our borders.

So, what is going on? Let us use Kajiado and Narok as an example. The counties are part of the famous Maasai corridor well known for the Great Wildebeest Migration between the Maasai Mara Game reserve in Kenya and the Serengeti National Park in Tanzania. Similarly, the Maasai people living in the two countries have been crossing across the imaginary border line for an eternity to be with their family members or to graze their livestock.

Diseases, wildlife and human history may not respect borders, but borders constrain the effectiveness of treatment for trachoma and other diseases.

As we have seen with Covid-19, no country can eliminate or control an infectious disease unless its neighbours are doing the same. Cross-border collaboration is essential but difficult to achieve. Complex administrative systems, fragmented programmes and funding gaps are just some of the challenges East African countries have faced every time they have tried to coordinate across borders.

This year something different happened. The big breakthrough came when the Ugandan Ministry of Health reached out to their counterparts in Kenya. The two governments then worked together to get all the necessary people and organisations to collaborate (health problems of this magnitude require all hands-on deck). In October, in a historic moment for trachoma elimination, the Ugandan and Kenyan governments with the support of the International Trachoma Initiative (ITI), successfully coordinated their trachoma drug distribution. For the first time people living on both sides all received their treatment at the same time, reducing the chance of migrating people missing out and then going on to reinfect others.

What was different about this year? With the governments showing such leadership there was a greater incentive for everyone else to be flexible. Partners agreed to move beyond constraints like financial year deadlines so that communities could benefit. ITI played a key role in strengthening engagement between the two governments and ensuring drug logistics were coordinated.

Uganda’s trachoma drug distributions in the border area of Karamoja is funded by the Act to End NTDs-East Programme (USAID/RTI). My organisation, Sightsavers, in collaboration with the Kenyan Ministry of Health and the Fred Hollows Foundation, implements trachoma programmes in the West Pokot and Turkana border counties in Kenya with funding from the Accelerate Programme. We were all resolute that to defeat this scourge, once and for all, we would look beyond our internal systems and bureaucracies.

What can we learn from the Uganda and Kenya experience? Trachoma can be eliminated in our lifetimes but only if we learn to collaborate. Borders are imaginary lines that limit the social, economic and political potential of communities living in those areas. We found children living in Uganda and going to school in Kenya, because of our collaboration they did not miss out on treatment.

Data and research are important to get the right people to care and understand the importance of health issues. The trachoma maps I mentioned are derived from disease surveys. They tell us if the disease is a problem in a particular area, and if we are making progress towards eliminating it over time. Additionally, talking to people helped us understand their needs and perceptions and how we could improve our programmes.

From the initial advocacy meetings to the high-level launch of the drug distribution with ministers and press, everyone put effort in to making the initiative work. I do not think this would have happened if the governments themselves had not led the process. Having big international programmes like Accelerate and Act to End NTDs-East also helped.

Preliminary reports show the drug distribution was a success with a high-level of awareness and uptake in both countries. This will have huge implications not just for trachoma, but for all neglected tropical diseases and other health programmes. We are collecting everything we have learned together so that other programmes can benefit.

Disease is not the only thing that is infectious, hope is, too. Encouraged by the Kenya and Uganda experience, there is a feeling of fresh optimism for a similar collaboration between Kenya and Tanzania. The two governments are already talking and soon I hope we will begin planning future drug administrations together and finally see those red clusters on the map around our borders disappear!

Michael Kirumba is Deputy Director of the Accelerate Programme which aims to eliminate the blinding disease trachoma in seven countries by 2023 and make progress towards eliminating it in another seven countries. Accelerate is funded by a consortium of donors including the Bill and Melinda Gates Foundation, the Children’s Investment Fund Foundation, The ELMA Foundation, UK Aid and Virgin Unite.

Dear Alfred: Now That You Are An Angel in Heaven

#EndSARS and Nigeria’s Hunger for Leadership

Why I Support Okonjo-Iweala’s Candidacy for WTO DG