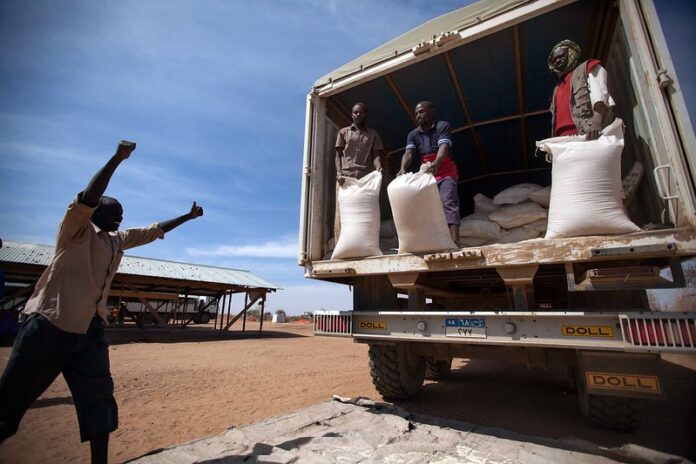 The World Food Programme (WFP) has received a consignment of fortified vegetable oil worth KES 112.2 million from the government of Russian to support its resilience-building activities in the drought-stricken arid counties of Kenya.

The contribution, the WFP said, will form part of the in-kind food package that it is distributing in this year’s lean season, when farming families typically face hunger.

The United Nations Office for the Coordination of Humanitarian Affairs (UNOCHA) had said that immediate action was needed to respond to the severe drought that is ravaging communities in Kenya’s dry regions.

According to UNOCHA, 2.5 million people are already experiencing deep food insecurity as a result of the drought.

The lean season is one of the most trying periods for farming families especially in the marginal areas as it is when most families run out of crop stockpiles before the arrival of the next season’s harvest.

Consequently, families are forced to make difficult choices by selling their only assets such as livestock and withdrawing children from school to help fend for the family – further hurting their chances for a food-secure future.

‘This contribution is very timely for Kenyan families grappling with acute food shortages in a country facing the prospect of a third successive failed rainy season’, the WFP Country Director for Kenya, Lauren Landis, said in a statement.

‘This year, because of the drought, we are providing support to families in our resilience programme for ten months, instead of eight.

‘At the same time, we are supporting them to adopt new farming practices, nutritious and drought-resistant crops that help them to achieve a more sustainable future. This contribution from the Russian Federation is an important component of that package’.

Landis said that the support from the government of Russia would help cushion vulnerable families, preventing a further deterioration of their food accessibility and nutritional status.

‘This intervention will protect more Kenyans from falling into a food and nutrition crisis in the coming months’, Landis added.

According to the International Union for Conservation of Nature (IUCN), over 80 percent of Kenya’s lands are classified as arid and semi-arid (ASAL) based on the relatively low amounts of annual rainfall received.

IUCN also noted that ASALs are particularly susceptible to droughts and flooding, and with increasing impacts from climate change, these areas are considered to be at risk of desertification.

The Press Secretary of the State Department for Development of the ASAL, Micah Powon, noted the number of people that need immediate food assistance in Kenya has risen to 2.5 million following two consecutive poor rainy seasons – the October to December 2020 rains and the March to May 2021 season.

‘An estimated 368,000 people in some of the worst affected counties are in the “emergency” phase of food insecurity (IPC four), which is one step away from a catastrophe or famine-like condition’, he said.

For his part, the Russian Ambassador to Kenya, Dmitry Maksimychev, said, ‘Russia is a long-term and strategic partner of WFP and a friend of the Kenyan people, we are pleased that this gift from the Russian people will help contribute to changing the lives of hardworking families by helping them through a difficult time while they work towards lasting solutions to the food security challenges in the arid and semi-arid areas of the country’.