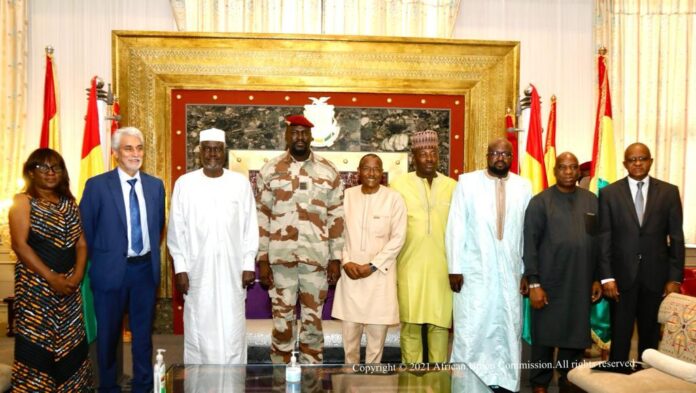 The African Union (AU) has reiterated its willingness to work with the Economic Community of West African States (ECOWAS) to ensure the political transition process in Guinea receives maximum support.

The President of the AU, Moussa Faki Mahamat, made the statement in a recent working visit to Guinea, where he met the president of the transition, Colonel Mamady Doumbouya, Prime Minister, Mohamed Béavogui, and the Minister of Foreign Affairs, Morissanda Kouyaté.

The military junta, however, produced a transition charter on 28 September, outlining plans to return the country to democratic rule, with ECOWAS demanding that elections be held in six months.

The charter allows for a government headed by a civilian prime minister and a legislative body called the National Transition Council (CNT).

Mahamat noted that Doumbouya briefed him on progress made towards returning the country to constitutional order.

‘Having come to enquire about the development of the situation in the country, he spoke at length with the president of the transition, Colonel Mamady Doumbouya, who was accompanied by the Prime Minister, Mohamed Béavogui, and the Minister of Foreign Affairs Morissanda Kouyaté’, the AU Communiqué read.

‘The president of the commission reiterated the will of the African Union to support the political transition process in Guinea, in close collaboration with the Economic Community of West African States (ECOWAS).’

‘He recalled the imperative to lead a consensual and peaceful transition which will lead Guinea towards democratic and transparent elections, ensuring a return to constitutional order according to a precise timetable.

ECOWAS recently upheld the financial sanctions and travel ban imposed on coup leaders and their relations in Guinea while the AU’s suspension of Guinea’s membership remains in place.