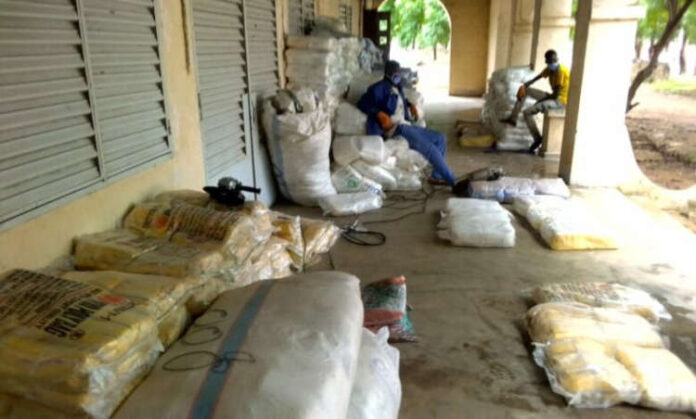 Greenpeace Africa has commended the government of Cameroon for intercepting and destroying over 42 tonnes of non-degradable plastic.

The environmental campaign organisation however called on the government to step up its efforts to prevent plastic pollution in the country.

Development Diaries gathered that the 531 bales of plastic were seized in Garoua by operatives of customs as part of Operation Halcomi Three.

In 2012, the government of Cameroon banned the importation, production, and sale of single-use plastic items of less than 60 microns.

The ban, which came into force in April 2014, followed reports that the country was dumping approximately six million tonnes of plastic waste annually, resulting in a myriad of environmental, biological, and health problems.

‘Almost eight years later, these plastic bags continue to be used as packaging in markets and unfortunately end up on the street after use’, Forest Campaign Manager at Greenpeace Africa, Ranece Ndjeudja, said in the statement.

‘Eventually, they end up buried in the ground and waterways. This process has been repeated over the years and contributes to the clogging of drains and other waterways in our cities, which leads to an increase in flooding experienced across the country in recent months.

‘The Ministry of the Environment must be more rigorous in enforcing the law banning the use of plastic in Cameroon.

‘It has the necessary means. We hope that this good action will continue as the state has all the means to enforce a strict plastic ban towards a cleaner and healthy plastic-free future’.

Greenpeace Africa is a growing movement of people acting in the protection of the environment with creative confrontations to expose environmental injustices around the world, developing solutions for a green and peaceful future.