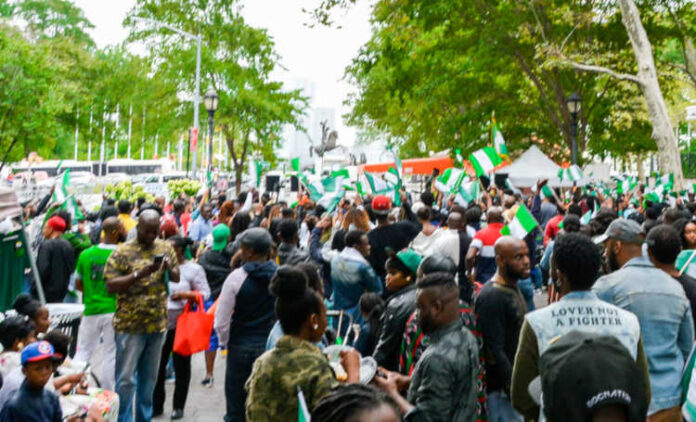 The Carnegie Endowment for International Peace says the Nigeria Network of NGOs was erroneously included in ​​a research paper that identified ‘360 pro-government Nigerian NGOs’.

The paper, titled Fake Civil Society: The Rise of Pro-Government NGOs in Nigeria, listed ‘Nigerian Network of NGOs’ as one of the pro-government NGOs masquerading as authentic civil society groups.

The findings, according to the paper’s author, Matthew Page, a scholar at the Carnegie Endowment for International Peace, suggest that Nigeria’s democracy may be on the decline.

In its reaction to the report, the Nigeria Network of NGOs (NNNGO) gave the author and Carnegie Endowment International for Peace a seven-day ultimatum to retract the report or face legal action.

In a letter to the Interim President of Carnegie Endowment International for Peace, Tom Carothers, the NNNGO also demanded an official apology over ‘their analysis of the Nigeria Network of NGOs being a “fake civil society and pro-Government NGO” in the report.

‘While we welcome a review of the civil society sector in Nigeria, we are worried that a research report such as the one published by Carnegie damages the reputation of civil society organisations in the South especially when it is not grounded in rigorous methodology and evidence’, the letter signed by the Executive Director of the NNNGO, Oyebisi Oluseyi, read.

‘Reports such as this is damning to the reputation of organisations like the Nigeria Network of NGOs and erodes public confidence and trust in our work and that of the entire civil society sector.

‘It further puts the life [of] our board and staff in danger as they may be attacked. Further to this, the network being listed as anti-USA has implications for our relationship with our civil society colleagues in the United States and may hinder our ability to operate effectively.

‘This report shrinks the network’s civic space and is tantamount to bullying by a resource rich Northern-based nonprofit’.

Following the NNNGO reaction, the Carnegie Endowment for International Peace said that the NGO network was erroneously listed as one of the ‘dubious NGOs’.

‘The Nigeria Network of NGOs was erroneously included in ​​the appendix list of dubious NGOs in Nigeria in a recent paper, “Fake Civil Society: The Rise of Pro-Government NGOs in Nigeria” ‘, the statement on its Facebook page read.

‘We have issued a correction to the paper and removed all mention of NNNGO’.

According to the paper, almost all of the pro-government NGOs exist in name only as less than seven percent are listed on Nigeria’s corporate registry as is legally required.

It noted that many of the pro-government NGOs ‘operate for only a short time’ before they fizzle out, as about 80 percent of them examined held just one or two press conferences in total.

The author noted that many of the ‘briefcase NGOs’ receive ‘high-level support and encouragement’ and they are ‘controlled by a small number of individuals who have personal and ethnic connections to Nigeria’s ruling All Progressives Congress (APC)’.

‘In addition to praising government and military leaders, Nigeria’s pro-government NGOs often attack legitimate civil society groups and even incite violence against them’, the report said.

The paper said that the NGOs are run from the stands by Nigeria’s top power brokers to help protect themselves from domestic pressure and outside scrutiny.

‘Many pro-government NGOs thrive on the coverage they receive from a few little-known media platforms, some of which are run by their leaders or their allies’, it added.

The paper commended civil society forums such as the Nigerian Civil Society Situation Room for viewing pro-government NGOs and their illiberal agenda with deep mistrust.

‘This state of affairs suggests that Nigeria’s more credible and well-established NGOs are able to identify and marginalise pro-government NGOs, even if many media platforms are not’, it noted.

‘Although this “member’s club” approach could be seen as exclusionary, it does ensure that pro-government NGOs’ illiberal rhetoric does not contaminate legitimate civil society narratives’.

The paper urged the tax and anti-corruption agencies in Nigeria to investigate the pro-government NGOs.

‘Nigeria’s mainstream media outlets should conduct more due diligence when covering previously unknown civil society groups and refuse inducements to attend their events or place stories about them’, the paper recommended.

‘The country’s many legitimate civil society organisations, meanwhile, could develop a set of voluntary standards that would distinguish them from the disreputable pro-government NGOs.

‘Donors, diplomats, and development professionals, as well as legitimate domestic and international NGOs, should do more to call out pro-government groups’ toxic behaviours and press their high-level backers to stop sponsoring them.