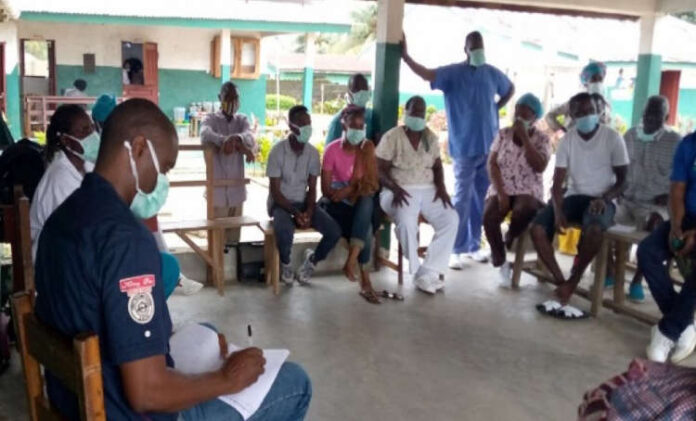 Refuge Place International (RPI) has donated 44 sets of oxygen regulators, several bags of rice and buckets to Liberia’s health ministry as the country battles against the Covid-19 pandemic.

Development Diaries reports that the essential items were delivered by the RPI team led by its Executive Director, Jomah Kollie, at the Star Based Treatment Unit, Bushrod Island.

It was gathered that funding for the items was provided by the University of Kentucky and friends of the RPI founder, Mosoka Fallah, on the back of an appeal by him for support to Liberia’s health sector.

‘Some of his friends and partners heard the appeal and responded in money and supply’, Chief of Office Staff to Fallah, Franzetta Nyanford, said.

‘We have raised the initial U.S.$50,000 or $8.5million [Liberian dollars] from the Royer Family Charitable Foundation to support different aspects of the response.

‘We also received donations of 150 regulators for oxygen cylinder from his former university in the states, the University of Kentucky, as well as Friends of Liberia (former Peace Corps volunteers to Liberia) and other friends and partners’.

Also speaking, Kollie said that the expected 90 oxygen regulators will be distributed to other treatment units across the country upon arrival.

‘We have sent U.S.$15,000 to a factory in China through our partner, Landcent Europe, to procure and fly to Liberia 15 oxygen concentrators with a ten litre capacity’, Kollie said.

The Director for Emergency Response at the Ministry of Health, Mark Luke, commended RPI for the kind gesture.

‘This is one of the most important medical devices that we need in the country. This will carry us even beyond Covid-19’, Luke said.

RPI, which works to improve health outcomes for mothers and children in Liberia, aims to create a replicable health care model for urban slums and poor rural communities in the West African country.

The NGO has a goal of reducing the high maternal, neonatal and child mortality rate and making quality health care accessible to all.