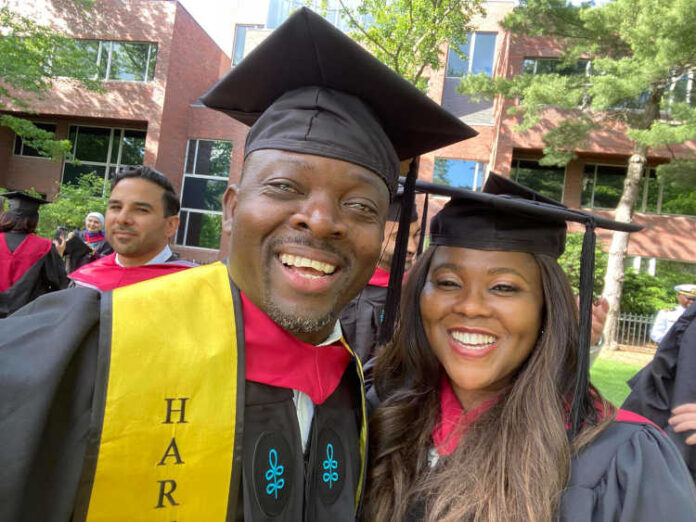 Patricks, who was expelled in 2007 from Cuttington University in Suakoko, Bong County, for speaking against ills in the school, thanked every one who supported him during his academic pursuit in the United States.

‘As I sit and reflect on my past, present, and future, I feel so proud of how far I have come’, Patricks wrote on his Facebook page.

‘This journey was a difficult one, but God Almighty kept me alive to pursue this dream’.

According to Patricks, in 1999, one of the managers of Firestone told him he was unfit for a college education.

‘In 2003, I surprised him and enrolled at Cuttington University’, he wrote.

‘In 2005, I was asked to drop from Cuttington due to lack of tuition. In 2006, another manager from Firestone (Mr Kargbo) paid my tuition’.

‘Do not be deterred when you fail or experience disappointments. That is life, and I am happy I have a family that showed me love’, he noted.

‘I know others will now begin to hold us by difficult standards, while others expect us to engage differently to conform to certain social, and political norms.

‘Well, on the day of my graduation, Professor Ron Heifetz, Professor of Public Policy, reminded us [to] remain humble and willing to learn from others.

‘Trust me, the learning process [has not] ended, and I hope to learn from you. If I can also help a few persons come and acquire the same knowledge I gain from the Harvard Kennedy School, I will’.

Patricks is a member of the Concerned Liberians against Corruption and Impunity (CLACI). CLACI is a coalition of Liberian human rights defenders that aims to address issues of corruption in Liberia and to ensure accountability for human rights violations in the country.

The coalition has focused its campaigns on investigations into corruption and the pursuance of prosecutions for perpetrators of war crimes committed during the country’s 14-year civil war.