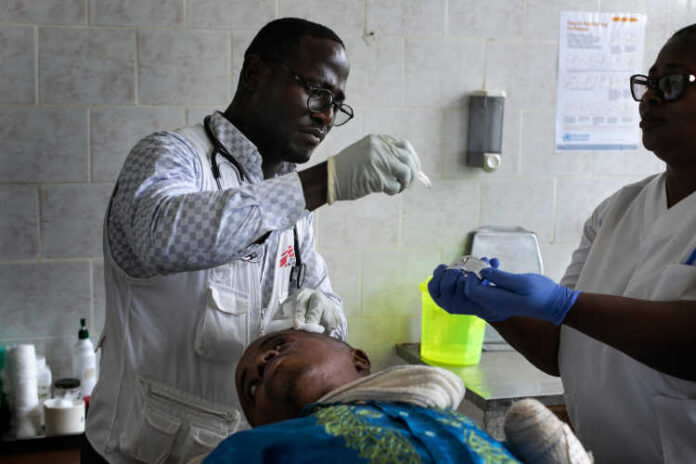 Doctors Without Borders (MSF) has called on the government of Cameroon to lift the ban on providing free, essential medical care in the restive Anglophone northwest region of the country.

As violence continues in the area, people have struggled to access health care.

The Cameroonian government, which suspended MSF’s authorisation to work in the region more than six months ago, had accused the humanitarian organisation of being too close to separatists in the area.

‘As we speak, our community health workers see people die and suffer because of the lack of treatment available in villages and displaced communities, and our ambulance call centre continues to receive emergency requests, which they are forced to decline’, MSF Operations Coordinator for Central Africa, Emmanuel Lampaert, said in a statement.

‘What rationale can justify these unnecessary deaths’?

The numbers of people treated in 2020 underlines the importance of MSF’s free services to the northwest region.

MSF teams provided more than 42,500 medical consultations, performed nearly 3,300 surgeries, and dealt with at least 4,400 patients who had been referred to its free, 24/7 ambulance service.

Since late 2016, Cameroon’s northwest and southwest regions have been rocked by violence after separatists declared the independence of ‘Ambazonia’.

The crisis in the regions started when lawyers and teachers took to the streets of Buea and Bamenda to protest the domination of French in Anglophone courts and schools.

Clashes between the country’s military and separatist fighters have led to more than 3,000 deaths and many displaced persons.

In a conflict zone like northwest Cameroon, the lack of basic health services, such as treatment for diarrhea, respiratory tract infections, and malaria, has contributed to a major health crisis.

Part of MSF’s operations in the region is the training and equipping of community health workers, which has also been halted by the government, according to Lampaert.

Health workers, both local and foreign, have been subject to attacks, as both the government and separatists accuse people who are trying to provide health care of taking sides in the conflict.

‘Despite months of discussions to respond to these allegations, we have been unable to restart our operations, leaving tens of thousands of people without access to lifesaving free healthcare’, MSF stated.