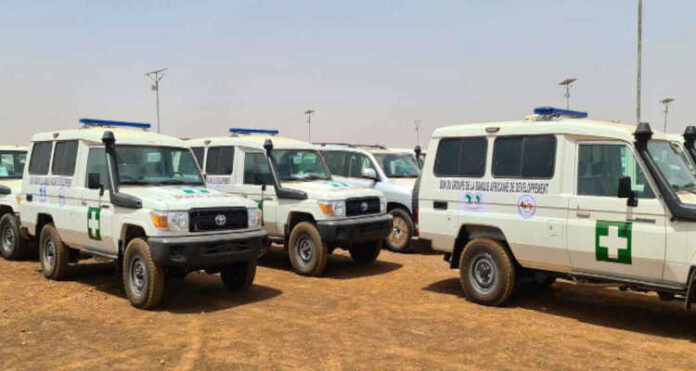 African Development Bank (AfDB) and the United Nations High Commissioner for Refugees (UNHCR) have handed over three ambulances, medical equipment and drugs to Niger to support the country’s response to Covid-19.

This donation, worth almost U.S. $1.45 million, is part of the support project for the Group of Five for the Sahel (G5 Sahel) member countries to fight the pandemic.

G5 Sahel was founded in 2014 as a regional, intergovernmental organisation that provides an institutional framework to promote development and security within Burkina Faso, Chad, Mali, Mauritania and Niger.

Before the outbreak of Covid-19, the Sahel was on the front line of climate change, with some of the consequences including persistent droughts, lack of food, conflicts over dwindling natural resources, and mass migration to Europe.

According to the AfDB, some 300 health workers will be trained in epidemiological surveillance and the response to the Covid-19 as well as in the management of mental health and psycho-social well-being.

The support project, coordinated by the G5 Sahel, is funded by the AfDB to the tune of $20 million, with UNHCR implementing it in collaboration with the governments of the five beneficiary countries.

The project is designed to support the implementation of national social protection measures for refugees and their host communities.

‘This programme is based on an integrated response to the health crisis articulated around the priorities of the response plans of the G5 Sahel countries’, head of the bank’s country office in Niger, Nouridine Kane Dia, said in a statement.

‘Beyond the emergency, the bank’s support will help strengthen Niger’s capacity to respond more effectively to future pandemics and public health issues’.

Kane Dia and the UNHCR Niger representative, Emmanuel Gignac, met with the Nigerien Minister of Health, Dr Idi Illiassou Maïnassara, for this purpose.

‘The ambulances will allow the evacuation of coronavirus patients and will also contribute to strengthening the health system for the benefit of refugees and the entire community that welcomes them’, Gignac, whose institution provides support to more than 500,000 displaced people and refugees in Niger, said.

Meanwhile, the government of Niger says it is making the fight against Covid-19 one of its top priorities in order to protect its population.

‘The support of the African Development Bank and the UNHCR comes at the right time to relieve the patients as well as the nursing staff who are on the front line’, Maïnassara said.

In addition to this support, the AfDB also awarded the G5 Sahel a grant of $1.4 million from the Transition Support Facility.