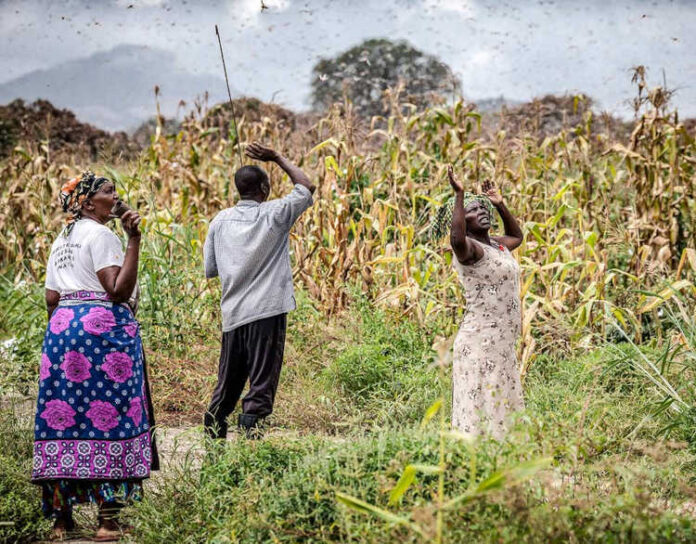 The Food and Agriculture Organisation (FAO) says the control measures in East Africa have reduced the risk of desert locusts and averted a food crisis in the region.

The Horn of Africa is facing the worst desert locust crisis in over 25 years, and the most serious in 70 years for Kenya, threatening food security and livelihoods.

However, it is understood that the large-scale control operations mounted by governments and supported by FAO over the past 14 months are declining the desert locust swarms in the region.

FAO launched a revised appeal for $311.6 million to expand its support for rapid control and surveillance operations in the Greater Horn of Africa and Yemen, Southwest Asia and West Africa and the Sahel.

The UN agency, in partnership with governments of affected countries in the region, is curbing the spread of desert locusts through continuous surveillance, ground and air control methods.

It is also understood that the development partners are conducting impact assessments and promoting environmental, health and safety measures.

Under the FAO’s rapid response plan, 3.2 million ha of land are targeted for locust control, and a total of 313,200 households have been targeted for livelihoods protection and recovery support.

‘The desert locust crisis is far from over. Now, countries have systems in place, teams in place, and are maintaining a state of full readiness’, The East African quoted the Manager of FAO’s Desert Locust response in East Africa, Cyril Ferrand, as saying.

‘But I would also point to what these operations have achieved in terms of preventing human suffering. Locust control operations prevented the loss of four million tonnes of cereal and 790 million litres of milk production, protecting the food security of 34.2 million people and avoiding $1.54 billion in cereal and milk losses’.

Compared to the mega swarms of 2020, the swarms now being treated by government teams run from a few hectares to 30 hectares and contain far fewer insects.

‘Remember last year there was one swarm in northern Kenya that was around 2,000 square kilometres in size. Now, daily missions in Kenya are down to one or two a day at the very most, compared with 20 at the peak of the upsurge last year’, Ferrand said.

‘Swarms in Ethiopia, Kenya and Somalia remain immature and continue to become smaller. Without rainfall, they will not mature and breed’, Cressman said.

‘The current rainy season that is expected to be drier than normal should contribute to a further decline in locusts’.

Tanzania President Samia Suluhu has also joined the war against the desert insects by directing her Minister of Agriculture, Adolf Mkenda, to implement control measures.

‘In agriculture, we have been informed on how to control locusts. They are there with our neighbours’, Samia said.

‘When a farmer plants his crops, he needs to harvest. So we must make sure that he reaps what he sows. And that he [does not] have to encounter locusts’.

But while the control measures had minimised the risks posed by the locusts, the crisis is far from over.