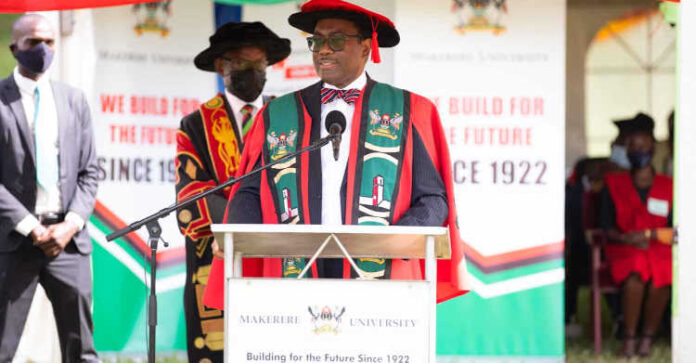 The AfDB boss was awarded the doctorate for his ‘distinguished contribution to science, research and academic leadership, reform and thought leadership’.

Vice-Chancellor of the university, Professor Barnabas Nawangwe, said that the AfDB had helped the university modernise laboratories and build new ones.

As a result, the university, according to him, now produces vaccines and medicines, including the anti-tick vaccine and diagnostics to manage Covid-19 and other diseases, as well as the low-cost medical ventilator, Bulamu.

Nawangwe said that the increased research and innovations by Makerere would help Uganda reduce dependence on imports, provide an alternative source of revenue for the university, and create jobs for unemployed youths.

‘Makerere University has also benefited from your visionary leadership in the various positions you have held in different organizations’, Nawangwe told the AfDB boss.

Adesina reminded an audience of Africa’s knack for unique home-grown innovation as he was honored by one of Africa’s oldest and respected universities.

He recounted how a phone call from the Ugandan President, Yoweri Museveni, some 20 years earlier had led to one of the country’s most famous inventions.

Back then, Adesina was associate director at the Rockefeller Foundation. Museveni had sought his advice to deal with the country’s banana glut.

‘It is such good news to join the roster of your distinguished honorary graduates of Makerere. Makerere is close to my heart. Makerere University is known for innovation’, Adesina told students and faculty.

Ahead of the ceremony, he met with the university’s Chairperson of Council, Lorna Magara, and university management.

‘University education is the most critical thing that any society should do, and when it comes to Africa, you find that not more than nine percent of our population has access to tertiary education’, Adesina said at the meeting.

He called for more investment in science and technology to cope with the fourth industrial revolution, marked by advances in artificial intelligence, big data, robotics, nanotechnology and biotechnology.