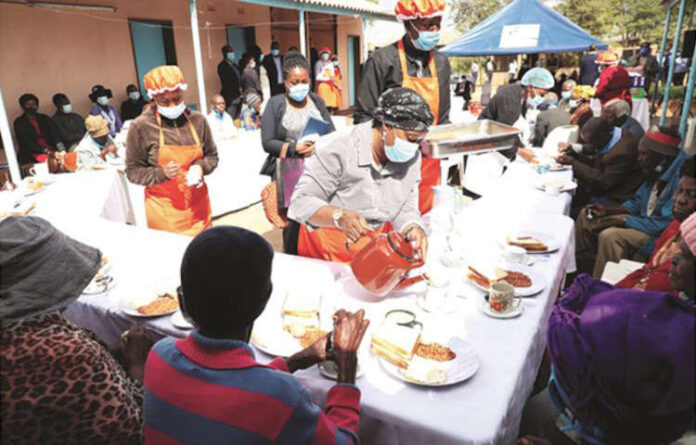 Elderlies, it was gathered, have been served breakfast personally prepared by the country’s First Lady, Auxillia Mnangagwa, who is the founder of the foundation.

‘I came here because I had no one to stay with at my rural homestead. I lived alone in Sibona Village in Gwanda’, one of the residents, Gogo Violet Sibanda, 78, said as she shed tears of joy.

‘I came last year after all my children passed on because of HIV and AIDS. I had two daughters and a son.

‘One of my daughters left behind two children and they were taken by their father to his rural home and up [till] now they have never followed up on me. I had no one to give me food or fetch water for me’.

Another resident, Sekuru Johane Paul, 81, from Malawi, said he started staying at the home in 2005.

‘I came here during the days of Operation Murambatsvina. I had a family, including a wife whom I married while in Harare, but we separated’, he said.

‘We are thankful for this programme because we never thought she [the first lady] had the vision of realising that she has many children including us here at the old people’s home.

‘We thought we were alone, but Amai has shown us love and that there are people who still care for us. We appreciate her good works and kindness’.

Similarly, Sekuru Miton Moyo, 88, said he started living at the home in June 2019.

‘I was abandoned by my children. One went to South Africa 24 years ago and has never came back. The other one is still in this country but I [do not] know where he stays while some of my children have died’, he said.

‘We thank the first lady very much because her works please me a lot. I hear a lot about what she is doing for people like me throughout the country. May God richly bless her’.

It was gathered that the foundation also donated foodstuffs to other homes in the province.

‘This is the very first breakfast that we are having which I know you will enjoy. I hope that we have started a new life that I want to see sekuru and ambuya enjoying their breakfast’, the first lady said.