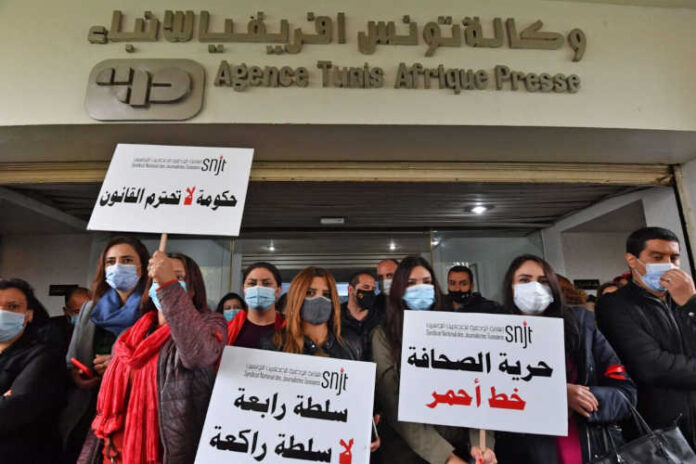 A group of non-governmental organisations (NGOs) has advised the government of Tunisia against making political appointments likely to turn public media into partisan and government media.

The group of NGOs, including the Tunisian League of Human Rights (LTDH), the National Observatory for the Defence of the Civil Nature of the State, the Tunisian Association of Democratic Women, gave the advice following the appointment of Kamel Ben Younes as head of the country’s national news agency, Tunis Afrique Presse (TAP).

Ben Younes resigned after journalists at the news agency demonstrated against his appointment in protest at what they called an attempt to undermine editorial independence.

Journalists protested the appointment of Ben Younes due to his involvement, prior to 2011, in violations of freedom of expression and of the press.

The protesting journalists and media professionals said that the appointment was an attempt at undermining editorial independence.

According to them, Ben Younes is too close to the moderate Islamist Ennahda, the biggest party in parliament, accusing him of backing moves to control the press before the 2011 revolution brought democracy.

‘We have never seen a CEO who was appointed and who has access to the TAP agency thanks to the police. It has never happened even in the other establishments’, Africannews quoted a journalist, Salma Henni, as saying.

But the country’s Prime Minister, Hichem Mechichi, had described the appointment as a purely administrative move, adding that it was in no way an effort to interfere with TAP’s editorial stance.

The NGOs advised the government against taking arbitrary decisions, and called on the prime minister to stop rewarding political parties that back.

They demanded the elaboration, in a participatory manner, of objective criteria, based on competence, independence and transparency in order to end political appointments likely to turn public media into partisan and government media.

‘Such practices violate the values of pluralism in democratic countries, as well as international standards for Freedom of Expression that the Tunisian government is obligated to uphold’, the NGOs said.

Before the Tunisian revolution, TAP was an arm of state propaganda based entirely on official sources.

But it has become a rare Arab news agency with editorial independence, often covering stories that criticise the government.