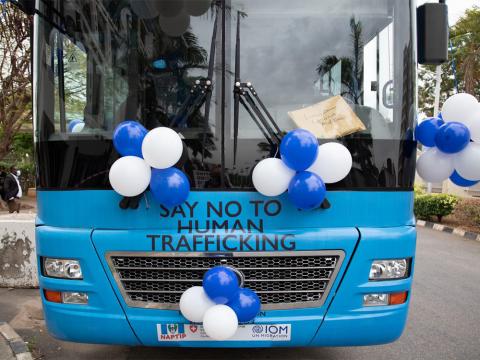 The International Organisation for Migration (IOM) and Nigeria’s National Agency for the Prohibition of Trafficking in Persons (NAPTIP) have launched ‘Blue Bus’ project to address the scourge of human trafficking.

The project, titled, ‘Preventing Trafficking in Persons through a Travelling Awareness-Raising Exposition’, is funded by the government of Switzerland through the Swiss State Secretariat for Migration.

In Africa’s most populous nation, Nigeria, the mix of a large youth population and limited economic opportunities has led to high levels of irregular migration, with many seeking to make the dangerous journey to Europe.

As part of creating awareness and promoting sustainable reintegration, IOM purchased and designed the awareness-raising travelling bus equipped with audio-visual and printed information.

‘I believe this project is a perfect symbol of our current state of the migration partnership and, more importantly, our future cooperation’, Head of the Federal Department of Justice and Police of Switzerland, Karin Keller-Sutter, said at the launch of the project.

‘We are not afraid to tackle difficult issues such as human trafficking jointly and we are doing it in an innovative, holistic and balanced partnership approach’.

Due to weak child protection laws and family protection services, many women and children are subject to exploitation.

The U.S. State Department that monitors and combats trafficking in persons has found Nigerian trafficking victims in more than 34 countries, with most of them in Europe, according a Human Rights Watch report – You Pray for Death.

‘The Blue Bus is a one-stop shop where vulnerable migrants, including community members, can get information on risks associated with trafficking in persons, where to report cases, and on-spot counselling services’, IOM Nigeria Officer in Charge, Prestage Murima, said.

Since 2001, IOM has been supporting the efforts of the government of Nigeria to manage migration through capacity-building, advisory services, and technical assistance on migration matters, including migration health and information.