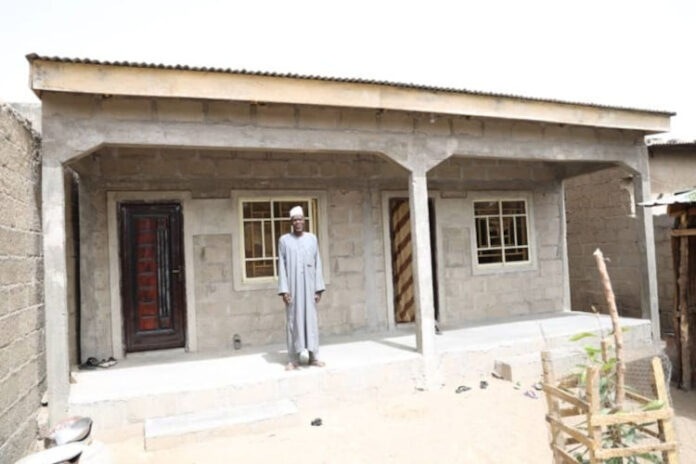 The government of Borno State, northeast Nigeria, has commended the European Union (EU) and Mercy Corps for providing shelter for internally displaced persons (IDPs) in Bama and Gwoza.

Mercy Corps, in collaboration with the EU, handed over 325 shelters to conflict-affected families in the local government areas in the last week of February 2021.

‘This is making a total of 650 permanent shelters built in Bama and Gwoza by the Maida programme to help in the recovery of people affected by insurgency’, Mercy Corps said in a Facebook post.

With millions of homes destroyed due to the Boko Haram insurgency in Nigeria’s northeast, over 1.9 million people have been displaced, according to the United Nations High Commissioner for Refugees (UNHCR).

Many victims, according to the UN agency, seek shelters in IDP camps and neighbouring Chad, Niger, and Cameroon.

The shelters were commissioned by the Borno State Governor, Engr Babagana Zulum, who was represented by the Permanent Secretary, Ministry of Reconstruction Resettlement and Rehabilitation, Engr. Abba Yusuf.

Yusuf said the intervention was one of the crucial infrastructures needed to facilitate the return of IDPs to their communities.

He called on the EU and other development partners to key into the state’s 25-year development plan and ten-year strategic transformation agenda.

Also speaking at the event, the EU representative in Nigeria, Cecile Tasin-Pelzer, said, ‘The 650 permanent shelters constructed in Gwoza and Bama, equipped with solar systems, will go a long way to restore hope and safety to the people whose property were destroyed by the insurgents’.

For his part, Mercy Corps’ Country representative, Ndubisi Anyawu, represented by Raiz Khan, said, ‘Working closely with Community Resilience Groups (CRG), the community members were engaged and a suitable shelter prototype for their homes was agreed upon – two rooms and a veranda for 325 of the most vulnerable returnee households’.