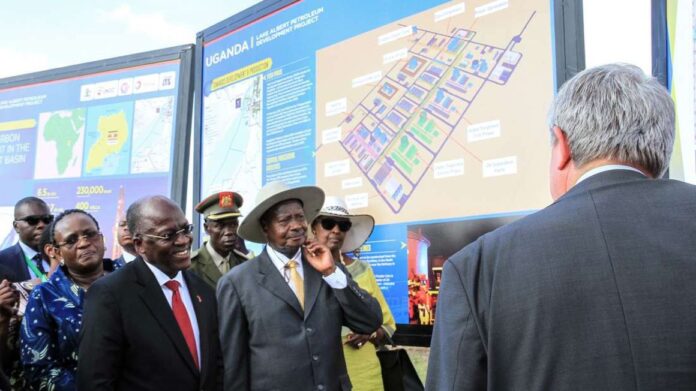 The pipeline, according to the design of the project, will transport crude oil from Hoima district in Uganda to Chongoleani in Tanga, Tanzania.

In a letter to the bankers, the NGOs focused on the pipeline’s social and environmental threats.

It is understood that the signatories of the project include Friends of the Earth International, the Catholic Agency for Overseas Development, Reclaim Finance, Sierra Club, Global Witness, the IUCN National Committee of the Netherlands, BankTrack, Africa Institute for Energy Governance (AFIEGO) and Inclusive Development International (IDI).

‘The letter to the three banks acting as financial advisors for the project – Standard Bank, Sumitomo Mitsui Banking Corporation, and Industrial and Commercial Bank of China – and 22 banks that have recently provided finance to Total and CNOOC, comes as speculation mounts that a Final Investment Decision (FID), which would commit Total to mobilise capital for the project, is imminent’, an NGO, Inclusive Development International, said in a statement on its website.

Climate activists have already targeted Standard Bank, which has a large African presence, over the hydrocarbon ties of its board.

‘The risks of this project to people and nature in the affected countries, and to the world’s climate have been extensively documented’, the letter read.

‘These include: significant human rights impacts to local people through physical displacement and threats to incomes and livelihoods; unacceptable risks to water, biodiversity and natural habitats; as well as unlocking a new source of carbon emissions that will either prove financially unviable or produce unacceptable climate harm’.

‘As well as severe impacts on local communities and their rights, the pipeline threatens one of the world’s most ecologically diverse, wildlife-rich regions.

‘It threatens Uganda’s oldest and largest nature reserve, the Murchison Falls National Park, which would be opened up to large-scale oil extraction at a time when the world is acting to urgently reduce its reliance on fossil fuels…

‘In Tanzania, the pipeline will run through key biodiversity areas including the Biharamulo Game Reserve and Wembere Steppe Key Biodiversity Area’.

The NGOs called on Standard Bank and others to cease their financial advisory role to the project.