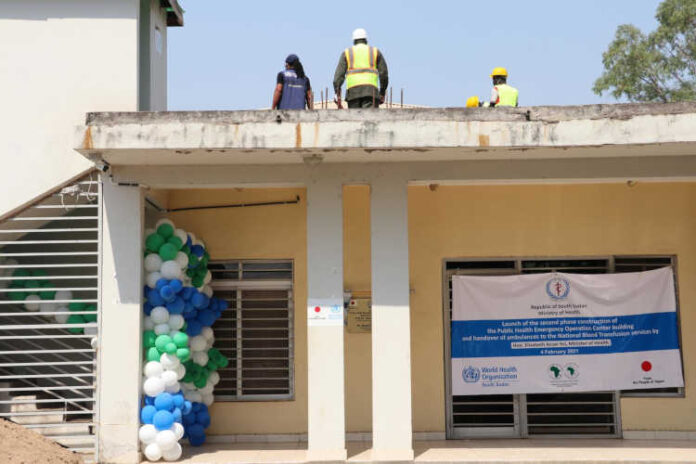 The African Development Bank (AfDB) and the World Health Organisation (WHO) have commenced the second phase of the construction of Public Health Emergency Operations Centre (PHEOC) in Juba, South Sudan.

The project is expected to strengthen preparedness and response capacities of the country for public health emergencies, according to a joint statement from the organisations.

It is understood that less than half the population in South Sudan lives close to a functional health facility.

HIV and tuberculosis (TB) are for instance common chronic infectious diseases but only a small fraction of the affected people has access to treatment and there is poor diagnostic capacity, according to Médecins Sans Frontières (MSF).

‘The only alternative to access adequate health care is often to leave, walk long distances and even cross international borders to find a hospital’, MSF said in a 2019 report on health needs in the country.

‘If a patient has a disease like tuberculosis, their breathing may be severely affected, and they may not be able to walk long distances.

‘If the patient is a pregnant woman in obstructed labour or in need of a caesarean, the most likely scenario is that she will die unless she reaches a hospital.

‘In such cases, the only way to get there is via speedboat or plane, as there are very few paved roads’.

PHEOC, under the Ministry of Health of South Sudan, is a hub that brings together all relevant experts, groups and stakeholders involved in preparedness and response.

‘By putting our collective efforts into a PHEOC project, the Ministry of Health will be better placed to respond promptly and effectively to public health risks and public health emergencies of international concern’, the country’s Minister of Health, Elizabeth Acuei Yol, said.

The minister, speaking at a ceremony in Juba, highlighted the commitments of the government of South Sudan, the contributions of the AfDB, WHO and other partners to strengthen mechanisms for delivering more integrated public health response during emergencies.

Also speaking, AfDB Country Manager for South Sudan, Benedict Kanu, said, ‘The support provided by the bank is yet another testimony of the bank’s growing commitment to closely work with the government of South Sudan, a valued shareholder of the bank, and other partners, to assist to build health system capacity for emergency preparedness in the country’.

WHO, according to the statement, is procuring an oxygen plant and vehicles to support the government’s ongoing Covid-19 response.

‘Having the right infrastructure in place is important. It is equally important to have the right health policy and programmes, so that we can better plan, prepare and respond to address everyone’s health’, WHO Representative for South Sudan, Dr Olushayo Olu, who was represented by Dr Guracha Guyo, said.