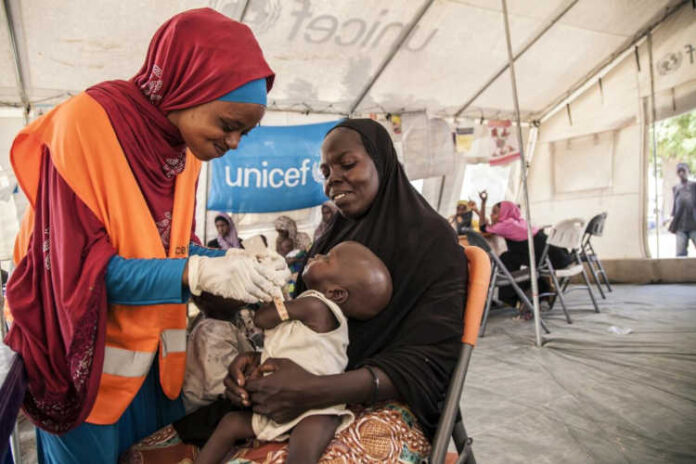 The United Nations International Children’s Emergency Fund (UNICEF) says it is deeply concerned about the health and well-being of 10.4 million children in the Democratic Republic of the Congo (DRC), northeast Nigeria, the Central Sahel, and South Sudan.

The aforementioned countries or regions, according to the international organisation, are experiencing dire humanitarian crises while also grappling with intensifying food insecurity.

An estimated 3.3 million children under five will suffer from acute malnutrition in 2021 in the Democratic Republic of the Congo, UNICEF said.

In the country’s northwest region, the nutrition situation is even more dire, according to UNICEF, as Kebbi State is experiencing a chronic malnutrition rate of 66 percent, more than 20 percent higher than Borno State in the northeast.

‘In Sokoto State, also in Nigeria’s northwest, close to 18 percent of children suffer from wasting and 6.5 percent suffer from severe wasting’, UNICEF said in a statement on nutrition crises.

‘An estimated 1.4 million children are expected to suffer from acute malnutrition in 2021, the highest since 2013’, it noted.

‘Meanwhile, the number of children suffering from severe acute malnutrition is expected to increase from about 292,000 children this year to over 313,000 children in 2021’.

UNICEF noted that in the Central Sahel countries of Burkina Faso, Mali and Niger, intensifying conflict, displacement and climate shocks will leave an estimated 5.4 million people struggling to meet their daily food needs during the next lean season.

It is understood that acute food insecurity has increased by 167 percent in Burkina Faso, 34 percent in Mali and 39 percent in Niger, compared with the five-year average.

‘For countries reeling from the consequences of conflicts, disasters and climate change, Covid-19 has turned a nutrition crisis into an imminent catastrophe’, the statement quoted UNICEF Executive Director Henrietta Fore as saying.

‘Families already struggling to feed their children and themselves are now on the brink of famine. We cannot let them be the forgotten victims of 2020’.

UNICEF urged humanitarian actors on the ground and the international community to urgently provide support for children and families.