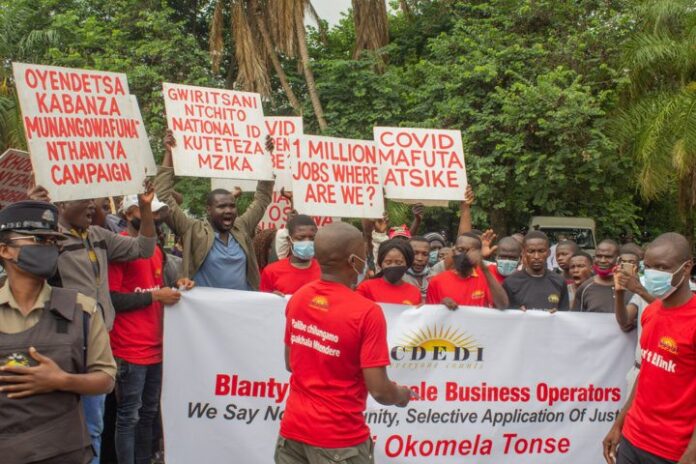 The Centre for Democracy and Economic Development Initiatives (CDEDI) has urged the Malawi government to address issues affecting the growth of the nation.

CDEDI, which had given the government a 14-day ultimatum to act on several issues of national concern, teamed up with the Blantyre Small Scale Business Operators (BSSBO), the Minibus Drivers and Conductors Association and the Kabanza Operators to urge President Lazarus Chakwera to end traits of impunity and arrogance

The rights group, in a petition, cited Chakwera’s perceived indecisiveness, the worsening impact of the Covid-19 pandemic, and the influx of illegal immigrants.

CDEDI condemned ‘The introduction of stringent Covid-19 preventative measures that are heavily impacting on the poor and the marginalised due to lack of cushioning measures for the same.

‘The influx of illegal immigrants from China, Nigeria, India, Lebanon, Pakistan, Rwanda, Burundi, and Somalia who are illegally conducting businesses in the country and have taken up the last available economic opportunities for the locals.

‘The unjustifiable sharp increase of fuel prices in total disregard to the impact of Covid-19 measures that had already hit hard the poor people in Malawi’.

Presenting the petition, CDEDI Executive Director Slyvester Namiwa accused Chakwera of  paying a blind eye to issues they have been raising against his administration.

The group also wants the government to find ways of dealing with land issues in districts such as Thyolo and Mulanje.

‘Now, everything rests with the Tonse Alliance government to demonstrate that it is indeed inclusive by addressing our concerns as a matter of urgency’, Namiwa said.