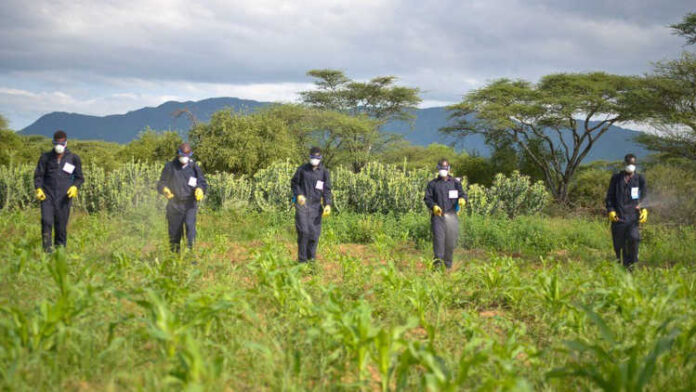 The United Nations has released Sh164 million to the Food and Agriculture Organisation (FAO) to address desert locust upsurge in Kenya.

It is understood that the funds will mainly be used to control operations, including air and ground surveillance and pesticide spraying.

Reports say swarms have so far been reported in Mandera, Garissa, Marsabit, Tana River and Wajir.

Development Diaries understands that the new generation of desert locust swarms is threatening agricultural and pastoral livelihoods and the food security of millions of people in the Horn of Africa.

The Cyclone Gati is understood to be the most powerful tropical storm ever to hit Somalia.

‘They have been entering into northeast Kenya and are likely to spread throughout northern and central counties’, Haq said.

According to FAO, if not controlled, the swarms could destroy crops and pasture and threaten the livelihoods and food security of over three million people in the region.

UN Undersecretary-General Mark Lowcock, who announced the release of the fund to the FAO, revealed that since early 2020, locusts control in Eastern Africa and Yemen had affected production of food enough to feed 18 million people for a year.

It was gathered that partners and donors have so far committed Sh22.3 billion to support FAO efforts.

The funding has allowed FAO and governments to rapidly scale up locust response capacity in a region that has not faced an upsurge of the pest on this scale in decades.

According to FAO, control operations have prevented the loss of an estimated 2.7 million tonnes of cereals worth nearly Sh89.2 billion in countries already hard hit by acute food insecurity and poverty.

Over 200,000 families that have lost their crops have been given cash compensation so that they can cope with shortage of food, according to the humanitarian organisation.