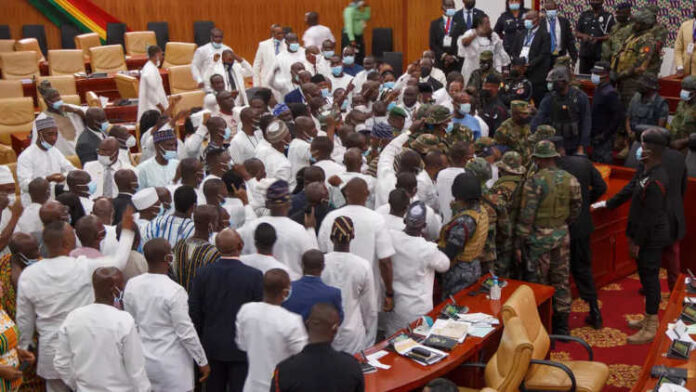 Fourteen civil society organisations (CSOs) in Ghana have condemned the clash in the country’s parliament over speakership.

The clash started after a lawmaker from the ruling party tried to seize the ballot box during the vote for parliament speaker.

Ghanaian soldiers intervened in the parliament to quell the clash.

The 14 CSOs, including the Civic Forum Initiative (CFI), the Institute for Democratic Governance (IDEG), the Centre for Democratic Development (CDD), and the Media Foundation for West Africa (MFWA), called for the perpetrators of the act to be disciplined by the parliament.

‘It reflects a rising pattern of excessive use of the armed forces to deal with civilian matters’, the CSOs said in a statement.

‘As a nation, we must quickly move away from this developing pattern as we move forward.

‘Also, for a temporary period, the unruly antics of members of parliament-elect threatened to prolong a dangerous constitutional and governance situation, where there was no parliament and no president to govern the country’.

The CSOs commended the leadership of the New Patriotic Party (NPP) and the National Democratic Congress (NDC) for managing to find a compromise.

‘The resolution achieved by the two political parties confirms that the only way the eighth parliament can succeed is by the two sides working together in a spirit of compromise, consensus-building, and accommodation in the service of all Ghanaians, and in pursuit of development for the country’, they said.

They urged the NDC and all other political parties to fully participate in the inauguration to help promote unity and peace in the West African nation.