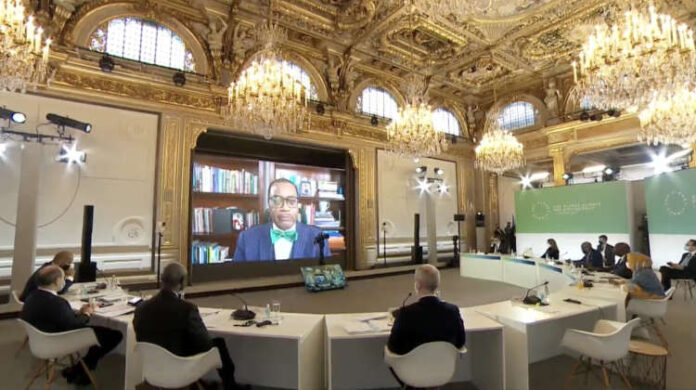 Adesina, who was named GGW champion by the French President, Emmanuel Macron, at the One Planet Summit 2021, was recognised for his personal commitment to addressing climate change in Africa.

The position, Development Diaries gathered, will see Adesina play a significant role in mobilising political and economic support for the initiative.

The summit was held to mobilise support for the ambitious project to plant an 8,000km swathe of trees and other vegetation across the Sahara and Sahel regions of Africa.

The Sahel is on the frontline of climate change and millions of people in the region are already facing its devastating impact.

Some of the consequences include persistent droughts, lack of food, conflicts over dwindling natural resources, and mass migration to Europe.

‘I would also like to welcome the commitment of Dr Adesina, President of the African Development Bank, who has agreed to take on the role of resource mobilisation champion and help raise, by 2030, all the necessary funds for the realisation of the Great Green Wall’, the bank quoted President Macron as saying.

In the role of champion, Adesina will lead the mobilisation of political and economic support for the initiative.

Macron also said, ‘The Great Green Wall initiative is the first step on the way to nature-based solutions as well as solutions based on the vitality of African eco-solutions.

‘France is very committed to this region from the standpoint of security and sustainability. We need to beef up the initiative for all the 11 countries’.

During the summit, Adesina announced that the bank would mobilise up to $6.5 billion over the next five years for the initiative, joining multilateral development institutions, governments and development partners that have pledged over $14 billion.

It was gathered that the World Bank, for instance, pledged over five billion dollars in funding to advance land restoration and degradation issues and to address challenges around Lake Chad.