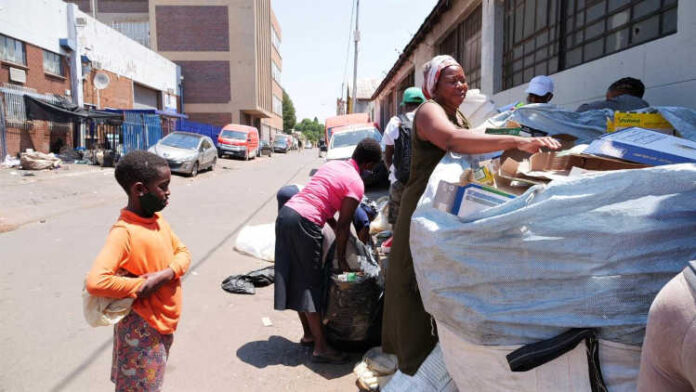 Hundreds of people in the Johannesburg suburb of Lorentzville, South Africa, are benefitting from a Love Our City Klean (LOCK) project in the area.

Mimi Ngalula is one of the 1,750 people that have registered with LOCK to become recyclers, exchanging recyclables for a digital currency that they use to buy much-needed groceries.

Development Diaries understands that the project gives recyclers a card with a unique barcode that is used to load their recycling points.

It was gathered that they spend the points at a weekly ‘Swap Shop’ on essentials like beans, soups and rice.

‘I [did not] use to like recycling, but this taught us how to fish so we can feed ourselves’, Thomson Reuters Foundation quoted Ngalula, a refugee from the Democratic Republic of Congo (DRC), as saying.

‘I don’t know what I would have done without this’, the 42-year-old mother of five children added.

The recycling programme was created in June, three months after the nationwide lockdown to curb the spread of the Covid-19 pandemic was announced.

At the time, three million South Africans had lost their jobs and one in five were going hungry, according to a survey by several South African universities.

LOCK’s co-founder Zwelihle Magwaza teamed up with Makers Valley, a community-run project in Lorentzville, to create the programme.

It is understood that LOCK sells the collected recyclable materials to bigger depots, or private buy-back centres, and that money is used to fund awareness campaigns and city clean-ups.

‘We started this initiative because we see so much potential for the type of city Joburg could be’, Magwaza told the Thomson Reuters Foundation.

Several Swap Shop customers, it was learnt, said the recycling scheme was the only food assistance they were receiving during lockdown.

‘The recyclers are finding agency, which is great. But, at the same time, there is a need for bigger political and economic change to alter the circumstances in which communities undertake these kinds of initiatives’, a food security researcher, Brittany Kesselman, told the foundation.