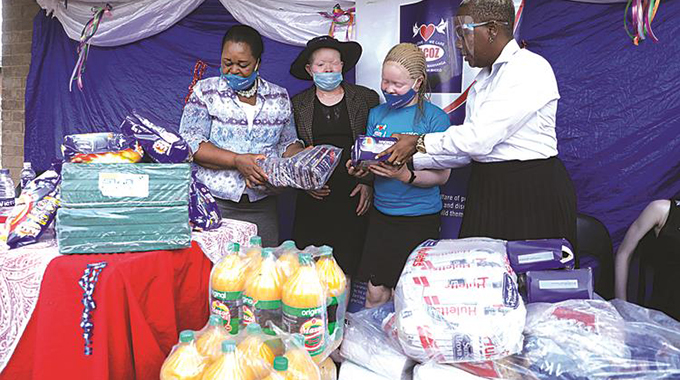 Development Dairies gathered that the donation, which included maize meal, cooking oil, sugar, beans, was handed over to the Public Relations and Corporate Affairs Manager at Zimpapers, Beatrice Tonhodzayi.

Tonhodzayi noted that the donation was part of the paper’s corporate social responsibility and a way of sustaining children living with albinism.

‘Today we have brought these foodstuffs for the children so that they have something to eat. We followed the list which you sent and bought the foodstuffs you requested’, she said.

‘We understand that people are struggling to get food and why we have bought all this stuff for the children’.

Executive Director of Albino Charity Organisation of Zimbabwe, Loveness Mainato, expressed her gratitude to Zimpapers for the donation, saying it will go a long way in sustaining the children.

She noted that the organisation was formed by parents of children with albinism after they faced a number of challenges.

The organisation takes care of 21 children, according to Mainato.

‘Many people think that if you provide sunscreen lotions to people living with albinism you have provided everything that they need; yet there is much beyond the provision of sunscreen lotions’, Mainato said.

‘As an organisation we are into so many activities, which include peanut butter making and gardening among others, to empower people living with albinism.

‘We have been affected by Covid-19 and we have very little resources to sustain these children.

‘We also promote our children to interact with other children through various sporting activities. Our aim is to envision a stigma-free and self-reliant people living with albinism in society’.