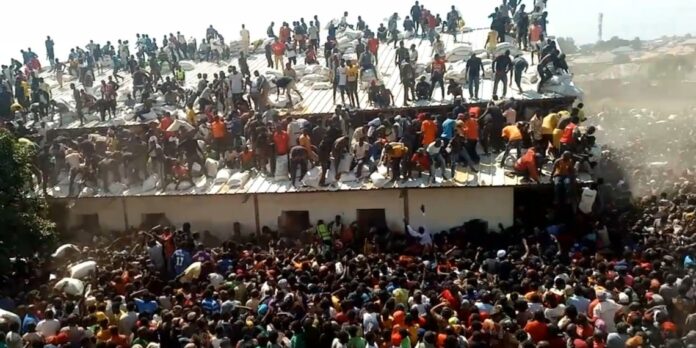 The African Network for Environmental and Economic Justice (ANEEJ) has called on the Nigerian government to investigate the alleged hoarding of Covid-19 palliatives meant for poor and vulnerable citizens.

There have been reports of residents, under the guise of the #EndSARS protest, breaking into warehouses in Lagos, Kaduna, Ondo, Edo, Cross River, Taraba and Plateau and looting food items.

Items such as bags of beans, sugar, salt, garri, rice, and cartons of noodles have been looted from various warehouses.

Development Diaries understands that the Coalition Against COVID-19 (CACOVID), comprising Nigerian business owners and corporate organisations, in partnership with the federal government, donated the food items.

It was gathered that CACOVID contributed billions of naira to help the country fight the Covid-19 pandemic.

A part of the contribution was used to build medical facilities and procure equipment and drugs across the states and Nigeria’s capital, Abuja.

Another part was then earmarked for the provision of food items to poor and underprivileged citizens to help lessen the economic suffering triggered by the pandemic.

The food items were delivered to state governments which held them in warehouses as they planned the logistics for their distribution.

‘This is condemnable and we call on the governors of Lagos, Kwara, Cross River, Ondo, Edo and Delta and others to explain why they chose to hoard the palliatives’, Executive Director of ANEEJ, David Ugolor, said.

But the 36 state governors have denied claims that they deliberately delayed the distribution of the items.

‘A lot of the information circulating the social media needs to be fact checked. The NGF pleads with members of the public to desist from spreading rumours which further create panic and stampede’, the Nigeria Governors’ Forum (NGF) said in a statement.

‘For example, some of the properties stolen and vandalised [during the EndSARS protests] include palliatives set aside for vulnerable members of society.

‘The NGF reemphasises and corrects the impression that palliatives found in warehouses that were broken into in Lagos and some other states were kept in storage for members of the society especially our vulnerable citizens.

‘The erroneous impression in the public domain that these palliatives were hoarded is not just inaccurate, entirely erroneous and untrue but also mischievous, to say the least.

‘For the avoidance of doubt, some of the palliatives had the CACOVID stamp embossed on them, meaning that their source is unambiguous.

‘As we know, CACOVID operations are mainly domiciled in Lagos, being the headquarters of most of the public-spirited organisations, corporate bodies and individuals that came together to form the Coalition Against Covid-19.

‘Until mid-October, when the NGF had its last meeting, up to ten states had not participated in the flag-off ceremonies for the distribution of palliatives in their states. This was because the items meant for distribution in these states had not been completely received from CACOVID.

‘Some other States that still had palliatives in their warehouses chose to keep a strategic reserve ahead of a projected second wave of Covid-19’.