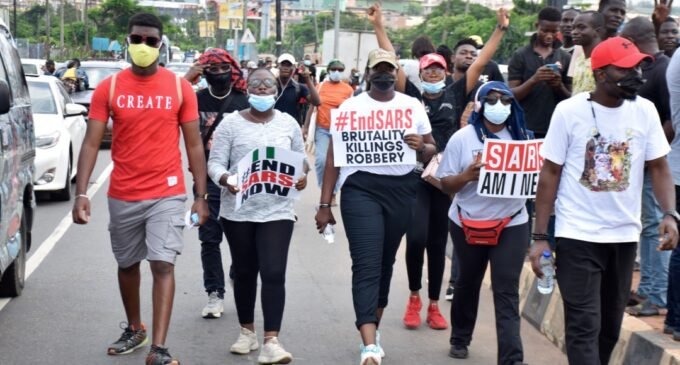 For over one week Nigerian youths have been protesting against police brutality.

Protests, with hashtag #EndSARS, were triggered by the alleged killing of a young man by operatives of the Special Anti-Robbery Squad (SARS) in Lagos State on 03 October.

The police unit has been dissolved but protesters are demanding a complete reform of the police force and the release of all arrested protesters.

Development Diaries understands that protesters have been attacked in Abuja, while their equivalents were attacked in the country’s economic capital, Lagos.

The rights group condemned the attacks and urged the Nigerian government to protect peaceful protesters.

‘Since yesterday [14 October] protesters in Lagos and Abuja have faced vicious attacks from hoodlums who were usually conveyed in buses’, Amnesty International Nigeria tweeted.

‘There were reports of severe injuries during these attacks.

‘The attacks usually occur in the presence of the policemen and other security agencies who are detailed to monitor the protest, yet failed to intervene to stop the attacks’.

Similarly, the Lagos State Governor, Babajide Sanwo-Olu, condemned the attacks in Ikeja, the state capital, saying that his government will not tolerate attacks on peaceful protesters.

Sanwo-Olu said that security operatives had been deployed in the area to protect protesters as they continue their march.