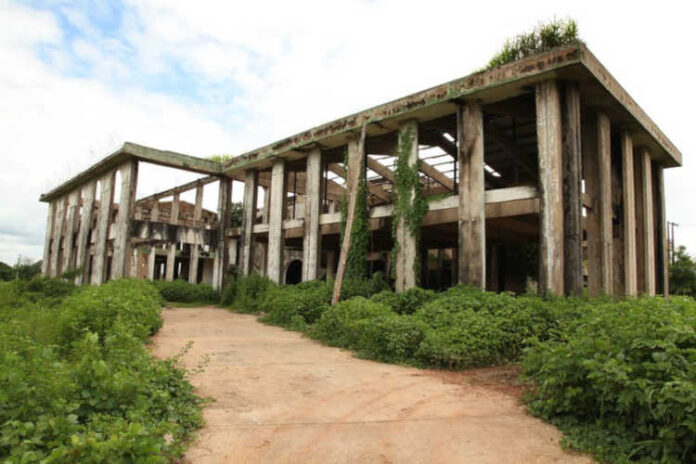 A presidential committee in 2011 reported that the number of abandoned federal government projects in Nigeria were 11,886. The 20-man Ibrahim Bunu-led projects assessment committee put an estimated cost of N7.78 trillion on the abandoned projects.

The central government was reported to have paid N2.696 trillion to contractors for the projects, leaving a balance of about N5 trillion naira.

Similarly, a report in The Guardian of 02 July, 2017, noted that the Akwa Ibom Integrity Group published more than 300 projects abandoned by the Niger Delta Development Commission (NDDC) in the state.

The commission was alleged to have abandoned a total of 121 rural roads, 75 classroom blocks, 69 rural water schemes, 43 mini-electrification projects among others across the oil-rich state.

Also in 2017, the Chartered Institute of Project Management of Nigeria, based on a survey, put the number of abandoned projects in the country at 56,000. According to the institute, these abandoned projects were worth N12 trillion.

The Independent Corrupt Practices and Other Related Offences Commission (ICPC) also monitors projects being executed by the federal government’s ministries and agencies through the Constituency Projects Tracking Group (CPTG) initiative.

However, Tracka was established by BudgIT in 2014 to enable citizens to follow up on budgetary capital expenditure and constituency projects in their respective communities and provide feedback.

Tracka’s objective, in summary, is to open up public finances to the wider Nigerian populace, making them vanguards for service delivery and transparency, and allowing citizens to take ownership of capital projects.

Several studies have been carried out to understand why government projects are abandoned in Nigeria. Jonathan Oniore’s Budget Implementation and Economic Development in Delta State from 1991 to 2010 is one such studies.

Oniore recommended in the study, which was published in 2014, strict observance of budget discipline, creation of enabling operational environment, putting in place of adequate supervisory machinery, positive consideration of reasonable suggestions from interest groups, introduction of remedial measures at the appropriate time and the use of accurate data in the cause of preparing budgets.

In addition, the authors of Budget and Implementation of Public Policy in Nigeria, Victor Ekhator and Paul Chima, found that the goals of most policies were not accomplished in Nigeria due to incessant budget failure at the stages of formulation and implementation.

Critical among the factors responsible for the failure, according to the study released in 2015, were delay in preparation, late submission and appropriation, cumbersome bureaucratic process of securing release of funds, shortfall in revenue, poor implementation plan and corruption.

The researchers recommended effective monitoring, timely submission of the budget to legislature by the presidency, and discouragement of unnecessary lobbying of national assembly by MDAs.

Moreover, Innocent Nwaorgu, the author of The effect of dominant individuals on budget
implementations in Nigeria, which was published in 2018, revealed that embezzlement and fraudulent activities, and lack of proper budgeting processes were responsible for the failure of budget in the country.

They recommended that budgets be religiously implemented without considering or accommodating the personal or selfish interests of different stakeholders in the political system.

The researchers also recommended that an efficient and effective monitoring of approved budgetary projects be put in place, and there should be zero tolerance for corruption.

Tracka, which is a continuous project, is designed to cover the length and breadth of Nigeria by engaging and partnering with citizens across the country.

With one project at a time, Tracka is understood to have been established in 586 local government areas across 26 states, where its officers hold town hall meetings with community champions.

Community champions, according to BudgIT, engage residents in their respective communities on civic education (names and details of their representatives at the national assembly, constituency offices) and budget-related issues and give feedback on the community engagement to Tracka officers.

Tracka has tracked 15,859 projects in 7,589 towns and has held 7,612 town hall meetings. In September 2020, the platform announced it had recorded notable results in August in six states, namely, Osun, Niger, Kaduna, Lagos, Ekiti and Kebbi.

It was learnt that Governor Kayode Fayemi in July 2020 announced the commencement of numerous renovation of projects, including primary health care (PHC) facilities and public schools, across the state following Tracka’s advocacy efforts.

The Ekiti governor stated that his administration had commenced the renovation of PHC facilities across the state, including Okeyinmi Comprehensive Health Centre.

Another notable success, according to Tracka, was Niger State’s approval of its request to monitor educational projects across the state. It noted that the government of the north-central state granted access to data covering Universal Basic Education intervention projects in the state from 2013 to 2018.

Additionally, the Tracka team in Niger State, it was learnt, aided the completion of an abandoned primary health centre in Gurara Gawu Babangida, Lambata, after calling the government’s attention to the project.

‘Our tracking officers monitored the failed sections of Lawanson road in Surulere LGA, Lagos State’, a tweet by the organisation read.

‘We reported the case to Lagos State Public Works @LSPWC_Official and the reconstruction of the failed sections commenced a week after. The Health Centre has been constructed and completed’.

The organisation said that there were notable successes in Osun, Kaduna, and Kebbi, too, with the Osun State government deploying resources to commence the construction of a primary health centre in Ido community.

BudgIT tweeted, ‘We discovered an abandoned primary health centre in Ido community, Egbedore LGA, Osun State. This facility is among the 332 healthcare centres to be renovated in Osun State.

‘Through our advocacy movement and persistent calls on the Osun State government and other relevant authorities, resources have been deployed and the abandoned project is now under construction’.

Working with ICPC is Tracka’s standout achievement, according to the head of the platform, Uademen Ilevbaoje, as the anti-corruption agency uses the data that Tracka provides as a lead to track corruption incidents.

‘The citizen must continue to hold elected representatives accountable by asking questions and demanding information on budgetary provisions in their respective communities by getting involved’, Ilevbaoje told Development Diaries.

The abovementioned CPTG, which was initiated by ICPC in 2019 to ensure proper implementation of funded projects at the various constituencies in Nigeria, is similar to Tracka.

The CPTG initiative, according to the federal government agency, is yielding positive results as some contractors had gone back to sites to complete unfinished projects. Additionally, the ICPC reported in November 2019 that the CPTG had uncovered N3.9 billion included in the 2019 budget for constituency projects but not allocated to any specific project or sector.

ICPC Chairman, Professor Bolaji Owasanoye, reported that the CPTG had tracked and seen to completion in the pilot phase 255 projects out of 424 projects in 12 states spread across the six geo-political zones.

It is understood that the CPTG also tracks projects being executed by the federal government’s ministries and agencies to ensure quality project delivery across the country.

However, the uniqueness Tracka offers is that it empowers a large number of Nigerians, irrespective of their literacy capacity and geographical divide, to track and provide feedback on public projects in their respective communities.

Through online engagement and the project tracking officers across the states, Tracka amplifies the voices of citizens.

Although Tracka has recorded noticeable acceptance from quite a number of citizens and even public officials and institutions, public apathy still lingers.

Nigeria: The Need for Climate-Smart Agriculture