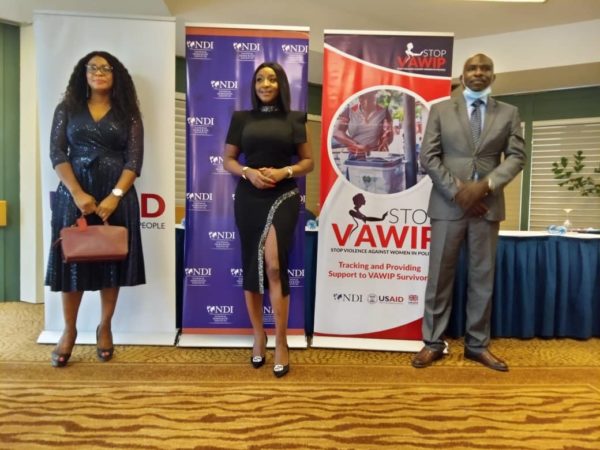 Development Diaries gathered that the nonprofit organisation, which works with partners in developing countries, unveiled the Nigerian actress during a press conference at the Transcorp Hilton, Abuja.

Available data shows that the overall political representation of women in government in Nigeria is less than seven percent.

Moreover, from forced and early marriages to the physical, mental or sexual assault on a woman, nearly three in ten Nigerian women have experienced physical violence by age 15, according to the Nigeria Democratic Health Survey (NDHS).

Similarly, the UN agency in charge of sexual and reproductive health agency, UNFPA, says that incidence of gender-based violence is growing in a rapid manner in Nigeria.

Responding to the challenges that women face, the NDI, with support from the United States Agency for International Development (USAID), came up with two initiatives aimed at increasing their representation in public offices.

One of the initiatives, Supporting Advancement of Gender Equality (SAGE), seeks to remove barriers by advocating reforms of the country’s laws and political party policies and procedures; while the second initiative seeks to address and mitigate gender-based violence.

Speaking at the event, Edo encouraged Nigerian women to dare to do great things.

‘It is a critical time for women in our country, and I am very excited to be here and to formally take on the role of the NDI Ambassador for Women’s Empowerment in Nigeria’, the movie star said.

‘When I first [learnt] from Stephen Snook of NDI’s work in Nigeria, I wanted to help. I believe women should dare to do great things. NDI is addressing two issues that are very important to me.

‘The first of these is the low percentage of women who serve in public office. On average, in all the parliaments of the world, only one seat out of four is held by a woman. This isn’t enough.

‘Further, only 16 percent of parliamentarians are under the age of 40 – and the larger percentage of these are also men. Women make up fifty percent of the population in every country’.

Additionally, the Nigerian actress said she was determined to enhance women’s empowerment and political participation in Africa’s most populous nation.

‘We are underrepresented in eligible age groups. In Nigeria, I am sorry to say the number of women in elected offices is worse than the world average, even worse than some of our neighbours.

‘And so l am joining the cause of improving women’s chances of running successfully for elected office. I [will not] be alone. There are many who will be helping prominent Nigerians…

‘We will be united in the cause of amending laws and addressing other barriers, to level the playing field so women can compete successfully for elected office in our country’.

Development Diaries understands that another initiative working towards women’s empowerment in Nigeria is ElectHER.

An initiative of the Social Change Network (TSCN) Africa and Women in Leadership Advancement Network (WILAN), ElectHER, according to information on its website, ‘is an end-to-end women’s political advancement initiative that addresses the significantly low representation of Nigerian women in politics by engaging, encouraging, equipping (building capacity), and enabling women (financing) to decide, run and win elections’.

ElectHER was recently awarded an annual grant of $50,000 by Platform Capital Group to enhance women’s empowerment and political participation.

Based on an agreement signed by ElectHER and Platform Capital Group, the immediate activities to be funded include the setting up and launching of the ElectHER Academy, which is aimed at providing access to quality online and offline training for at least 1,000 women interested in politics.