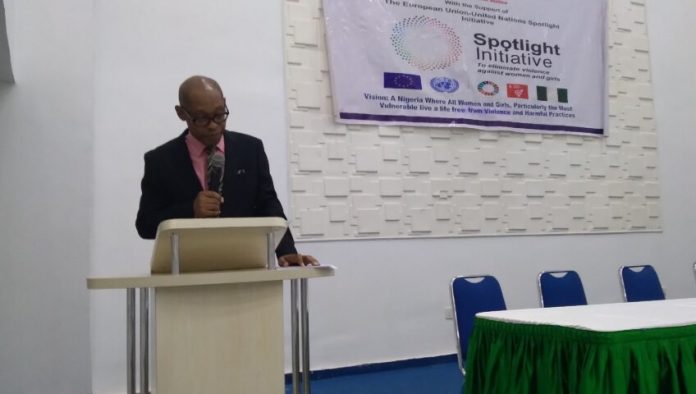 Civil society organisations (CSOs) and related groups have called for the inclusion of ‘gender character’ in Nigeria’s constitution.

The call was made during a capacity building workshop, where issues tied to sexual and gender-based violence (SGBV), violence against women and girls (VAWG), and harmful practices (HP) were addressed.

Development Diaries learnt that the workshop, which was convened by Centre for Social Justice (CSJ), with the support of the EU-UN Spotlight Initiative, was part of a series of activities aimed at ending violence against women and girls.

From forced and early marriages to the physical, mental or sexual assault on a woman, nearly three in ten Nigerian women have experienced physical violence by age 15, according to the Nigeria Democratic Health Survey (NDHS).

Similarly, the UN agency in charge of sexual and reproductive health agency, UNFPA, says that incidence of gender-based violence is growing in a rapid manner with the activities of the insurgency in northeastern Nigeria.

During the workshop, which was held in Abuja on 20 and 21, August, participants engaged in group discussions focused on identifying laws, policies, and practices that violate women’s rights.

In their resolutions, they advised the national assembly, in collaboration with the Nigerian Law Reform Commission, the Federal Ministry of Justice and relevant CSOs, to ‘undertake a comprehensive review of laws and policies at the federal level against the background of state obligations in CEDAW and other relevant standards, while the same should be replicated by State Houses of Assembly and relevant agencies and CSOs at the state level’.

The participants, including women’s and Girls’ rights groups, the media and faith-based groups, also called for the inclusion of maternal and child health as fundamental rights in the Nigerian Constitution.

They said, ‘[Participants] call for the inclusion of maternal and child health as fundamental rights in Chapter Four of the Constitution of the Federal Republic of Nigeria 1999 (as amended) and the funding should come as a first line charge in statutory transfers.

‘The Ministries of Women Affairs at the federal level and across the [36] states of the federation should be adequately resourced in terms of personnel, finance, technology, etc.

‘Gender mainstreaming should be vigorously implemented in government’s programmes while capacity building for gender responsive budgeting should be intensified.

‘CSOs should intensify advocacy for the vigorous implementation of the Violence against Persons Prohibition Act and the Child Rights Act as well as their adoption in all States of the Federation’.

The participants also said, ‘CSOs should intensify advocacy for the vigorous implementation of the Compulsory Free and Universal Basic Education Act especially through the adoption of a special intervention on the education of the girl child.

‘Commit to education and sensitisation of law enforcement agents, prosecutors and judicial officers on the implementation and enforcement of laws that criminalise SGBV/VAWG and HP as well as violations of the SRHR of women and girls.

‘Commit to effective participation in the shadow reporting process to CEDAW at Nigeria’s next reporting period’.

The convener of the workshop, CSJ, is an institution established to introduce professionalism in civil society work, using social entrepreneurship to provide services to enhance and deepen economic, social and political change in Nigeria.