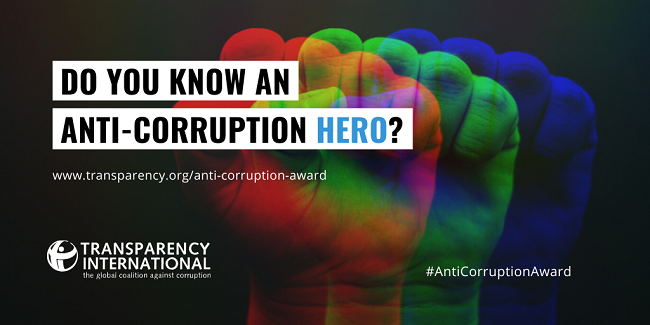 Nominations are invited for the Transparency International (TI) Anticorruption Award 2020. Launched in 2000 as the Integrity Award, and renamed in 2016, the Anticorruption Award honours remarkable individuals and organisations worldwide, including journalists, public prosecutors, government officials and civil society leaders.

The Anticorruption Award aims to recognise a particular action or initiative undertaken by one or several individuals or organisations that constitutes a tangible contribution to the fight against corruption and the mission of the TI movement. While recipients of the award would be expected to be of exemplary character, the Anticorruption Award will recognise a particular action or initiative demonstrating manifold impact in the fight against corruption worldwide.

The award committee will use the following criteria to assess eligible nominations: