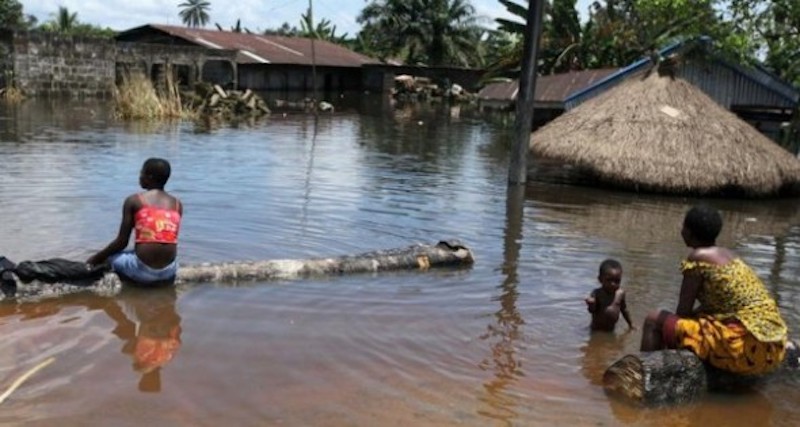 Governments must step up efforts to protect the poor from natural disasters if they are to have any real chance of ending extreme poverty, a report said on Wednesday.

New research from the London-based Overseas Development Institute (ODI) found that, in 2030, up to 325 million extremely poor people will be living in the 49 countries most exposed to climate extremes and natural hazards – including floods, droughts, storms and earthquakes. Most of them will be in South Asia and sub-Saharan Africa.

A high-level panel appointed by the U.N. Secretary General proposed earlier this year that the next set of global development goals – which are due to run from 2016 to 2030 and are now under discussion – should aim to eradicate extreme poverty.

“Disasters pose a really critical threat to this goal of ending extreme poverty, and it would only take a handful of disasters in some of these countries of concern to blow that target out of the water, almost before it has even started,” Tom Mitchell, head of climate change for ODI and one of the report’s authors, told Thomson Reuters Foundation.

The study picks out 11 countries that, by 2030, will have high numbers of people in poverty, high exposure to multiple hazards and not enough capacity to minimise the impacts: Bangladesh, Democratic Republic of Congo, Ethiopia, Kenya, Madagascar, Nepal, Nigeria, Pakistan, South Sudan, Sudan and Uganda.

India does not feature in the list of those most at risk of disaster-induced poverty because it is judged to have relatively good mechanisms at national level to protect people, Mitchell said.

Since its eastern coastline was battered by a powerful cyclone over the weekend, the Indian government has earned much praise for its swift action to move almost 1 million people into shelters, limiting the death toll to around 35. That demonstrated progress in disaster preparedness since 1999, when a monster storm hit Odisha state, killing 10,000 people.

Nonetheless, the ODI report said India should be treated as a “special case” because of its vast size, and looked at rather as a cluster of sub-national entities. Among those, some states are a cause of “considerable concern”, including Assam, Uttar Pradesh and West Bengal, it added.

Only in June, unprecedented rainfall brought devastating floods and landslides to the Himalayan state of Uttarakhand. Almost 6,000 people are missing, presumed dead, and the lives of 2 million people were disrupted, after the state’s authorities failed to act on early warnings.

Despite the successful evacuation of coastal communities this week, there was widespread destruction of homes, crops and vital infrastructure including power lines. Initial assessments by the Indian Red Cross showed that 200,000 rural houses were damaged and 14,000 villages were torn down, leaving 600,000 people homeless.

“If we are going to deal with this poverty angle (to disasters), we need to focus on livelihoods as well as lives, and that is going to take a lot more than just evacuating people,” said ODI’s Mitchell. “Our standard preparedness – of getting people into protective shelters as quickly as possible – does almost nothing for saving people’s livelihoods.”

The report called for equal weight to be given to social protection and schemes to build up vulnerable people’s assets, alongside early warning systems. If people lose their incomes in disasters, they should get help to restore their livelihoods or find new work, Mitchell said.

Governments should also make critical infrastructure more resilient to disasters, and incorporate disaster risk into their land use planning, he added.

The ODI study, carried out in partnership with the UK Met Office and Risk Management Solutions, revealed that governments are not targeting their disaster prevention efforts at their poorest citizens. That needs to change, Mitchell said.

Another key finding was that climate stresses – which are getting worse as the planet warms – are a major cause of poverty. Analysis of data from rural Ethiopia and Andhra Pradesh in India suggested that where drought is a big risk, it is also the main factor in impoverishment. This bucks the common view that health-related shocks are the most important driver of poverty, the report said.

Because of these close links, the post-2015 development goals must recognize the threat posed by disasters and climate change to ending poverty, and include targets that tackle the main reasons for impoverishment, with natural disasters as a significant component, researchers said.

“If the international community is serious about ending extreme poverty by 2030, then it has to put disaster risk management at the heart of poverty reduction and fund it accordingly – and that’s just not happening at the moment,” Mitchell said. A September report from the ODI revealed that disaster risk reduction work received just 40 cents in every $100 of international aid between 1991 and 2010.

As well as urging greater investment, Mitchell called for a change in political incentives, so that politicians are rewarded for reducing poverty and disaster risk at the same time, rather than getting acclaim for their response only after an emergency happens.

“Let’s try to see the scene of a cyclone hitting a coastal belt of India that doesn’t show this level of devastation, and when we see that, we’ll know that things are really beginning to work better,” Mitchell said.

Read the original of this report on AlertNet Climate, the Thomson Reuters Foundation’s daily news website on the human impacts of climate change.